Ken Roth, the leader of  of Human Rights Watch tweets – a lot.

For a man who makes over $630,000 a year, it is amazing that the HRW board has no problem with his prolific tweeting.

His obsession is tweeting about Israel. While the percentage of tweets slamming Israel has gone down in recent years as his biases were revealed, he has maintained a consistent habit of practically never going more than 24 hours without tweeting something about Israel, nearly always negative.

Until this week, that is. 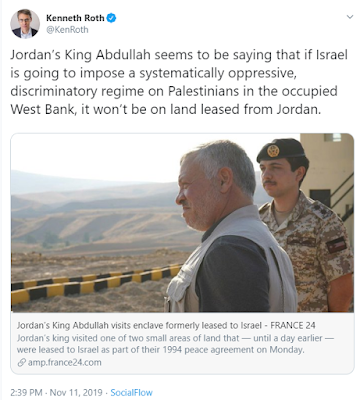 The Israel-Jordan peace agreement included Jordan’s leasing back land that Israel owned and in which Israelis had farms. The lease was for 25 years and intended to be renewed automatically every 25 years as a symbol of peace and cooperation. Yet Jordan decided to not lease the land, symbolically telling Israel, screw you – we have the land and you have no rights to it. A land for peace deal turned into an opportunity for Jordan to show how much it hates Israel.

But Roth twisted Jordan’s hate into, somehow, being about Palestinians. No Palestinians live anywhere near this plot of land. It isn’t even in the West Bank. Roth took Jordan’s side in their symbolic move against peace with Israel, which is a strange position for a supposed human rights organization.

Hours after that tweet, Israel assassinated an Islamic Jihad terrorist who was planning major terror attacks on behalf of Iran. HRW is on the record as saying that such attacks are legal under international law

Since then, over 200 rockets were shot towards Israel. Every single rocket is a war crime since they are being aimed at civilians.

And Ken Roth has not tweeted a word.

As always, he wants to tweet anti-Israel lies and vitriol, but suggesting that Israelis are victims of human rights abuses by a recognized jihadist terror group supported by Iran is simply not something Ken Roth can tweet about.

So he is silent.

He is waiting for an Israeli attack that accidentally kills a child or family – something nearly unavoidable when terrorists and terror groups purposely plot and plan in civilian areas. Then he’ll tweet against Israel, and mention the rockets as an aside so he can claim to be “objective.”

No, Ken Roth isn’t objective. His silence while a million Israelis seek shelter under fire shows that he effectively supports terrorism – when it is directed against Israel.