Rena Nasar’s grandfather or jidoh escaped violence and state-sanctioned persecution in Syria, walking for 20 hours until he reached Israel. Why is his story not told, and isn’t it time that Mizrahim were given a seat at the table, Rena asks in the Jerusalem Post:

I grew up knowing that my jidoh’s story, like that of so many Mizrahi Jews, was inseparable from Israel’s story.

I encounter this problem in my own work as an Israel educator. Sometimes, well-meaning programs inadvertently center the Ashkenazi experience and tokenize us as an exotic “other.” Other times, we are exploited to promote anti-Israel agendas that hardly any of us would ever support. More often, our story isn’t mentioned at all.

My most recent trip to Israel was illustrative of this problem. At Mount Bental, as my group overlooked Syria, our guide talked about Syrians and Israelis but never mentioned Syrian Jews. I stood in the back, debating if I should speak up about what Syria – now caught in a vicious civil war – meant to my community and how its expulsion and escape, along with the expulsion of Jews from other neighboring countries, shaped the Middle East. 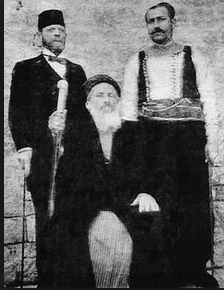 Being written out of or misrepresented in the story of Israel and the Jewish people is crippling. It can even trigger an identity crisis that leads members of my community to disengage from Israel and their heritage. Yet this is what happens in far too many programs that are aimed at fostering connections to Israel and Jewish identity.

How many American Jews know that the Holocaust extended deep into the Middle East? Can we meaningfully talk about the abuse Egyptian Jews faced or the veritable house arrest Syrian Jews lived under until 1992? I’d argue that education about the Middle East is woefully incomplete if we disregard the still-recent history of families like mine.

While my organization, StandWithUs, has developed materials centered on the plight of Middle Eastern Jews and given Mizrahi employees like myself a platform to share our stories, more must be done by us and others. This is why I want to challenge Jewish institutions and communities to do better at integrating Mizrahi Jews into our communal narrative. Here are just a few possible steps toward that goal: • Examine Israel curricula and programs, and incorporate our story systematically.

This should be done together with Mizrahi scholars, as well as organizations like Jimena and 30 Years After.

• Include Mizrahi and Sephardic religious traditions in our communal spaces.

This is not a one-way street. Mizrahi communities must also make a bigger effort to participate as an unwavering voice. But we must be welcomed and embraced as we do so. So many important causes today deserve our time and attention that it can be easy to overlook our internal struggles. Nevertheless, if we want to reach our potential as a Jewish community, we must start to fully include members of our family who have far too often been forgotten.