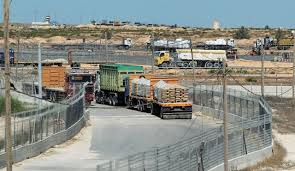 Ma’an News, as one of the few independent news agencies in the territories and perhaps the only one that has a full English news desk, is relied upon by many lazy Western reporters to get their stories


Israeli authorities opened the Karam Abu Salem (Kerem Shalom) crossing between Israel and the besieged Gaza Strip on Friday to allow limited amounts of fuel into the coastal enclave.
The Gaza Petroleum Committee said that some 500,000 liters of diesel, 100,000 liters of fuel and 120 tons of cooking gas are expected to enter.
The Karam Abu Salem crossing has been opened intermittently since the beginning of the year, affecting the small Palestinian territory’s access to fuel to power the enclave’s sole electricity plant.

The link from “opened intermittently” went to a story from March, that said:


Israeli authorities decided on Thursday to open the Karam Abu Salam (Kerem Shalom) crossing on Friday between Israel and the Gaza Strip to allow fuel into the besieged coastal enclave.
Kerem Shalom was opened earlier this month, and twice last month to allow diesel into the small coastal territory.

The links to the two other stories were similar.

However, Kerem Shalom is open every day from Sunday through Thursday, and it pumps fuel every one of those weekdays.

Ma’an is making it sound like it is hardly ever open.

Here’s what appears to be happening: Israel sometimes opens Kerem Shalom on Fridays when there is reason to believe that Gaza needs extra fuel. So whenever Israel decides to open the crossing on a Friday there are some press releases in the Arab press letting people know the situation.

The Ma’an English editors appear to not understand these stories, and assume that when the Arabic media reports that Kerem Shalom is opening on a exceptional basis on a friday, that means it is not open the other days of the week.

Every story in the link chain from Ma’an is for a Friday opening.

Are the current Ma’an English editors simply ignorant of the basic fact that Israel opens Kerem Shalom every day except holidays? (The reason it was opened on Friday is almost certainly because it will be closed this coming week for Yom Ha’Atzmaut.)

Or are they interested in putting a false picture of Israel to the world?

Either way, Western reporters should take any Ma’an report with a large grain of salt.