TOP NEWS
http://jewishrefugees.blogspot.com/2019/03/iraqs-unsung-jewish-airforce-hero.html
A Jew  appointed  head of Iraq’s Air Force? Unlikely as it may sound, it almost became a reality.  This is the extraordinary story of Nagi Dabby, son of Messouda Sourani and Efraim Dabby, as told by Sami Sourani, his first cousin. (With thanks for their help to Sass, Miriam)

Growing up in the 1920s, Nagi Dabby was very intelligent, had a fantastic memory and a charming personality.  But his mother Messouda was very worried. When he was a young schoolboy he would come home and sit on the swing (jelala) every day.  He never opened a book. So she went to see the teacher to find out what was going on. She was told that he was the best in his class.


Nagi Dabby had always wanted to be a pilot. He registered at the  Royal Military College, (Al-Madrasa Al-Askaria) at a time when  King Faisal of Iraq was encouraging Jews and other minorities to play their full part in contributing to Iraq’s prosperity.
It is telling, however, that he felt the need to change his name to Nagi Ibrahim to conceal his ethnic background.
After graduation, the Iraqi Government sent him to England for two years to be trained as a pilot. When he returned to Iraq, his career literally took off after Iraq acquired fighter ‘planes from Italy and the United States. 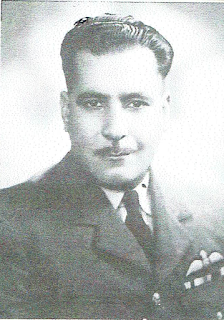 Amazing as it might sound, Nagi Dabby was within a whisker of becoming Head of Iraq’s Airforce. He was offered the top job after a purge of the Iraqi military following a period of instability. On October 29,1936, the then Iraqi Defence Minister, Baker Sidqi,  had staged a coup. Sidqi was assassinated a few months later and matters returned to normal.
Nagi turned down the job.
He went to England for a time, returning  to Iraq so that he would not be called a deserter. On his return, he  received a personal welcome from the Iraqi Armed Forces Chief of Staff.
While living in Iraq, he became a very close friend of King Ghazi (the son of King Faisal I) and his personal pilot. King Ghazi liked  fast cars and enjoyed flying at every opportunity.
After becoming an Iraqi officer Nagi never hid the fact that he was Jewish.
The Iraqi Minister of Interior  only flew in a plane if Nagi was the pilot.
However,  the Iraqi army and Defence Ministry became very antisemitic and refused him  the promotion to the rank of Major which he was due.
Nagi left  for England again just before King Ghazi was killed in a car accident. In England Nagi did a special training course  to attain the rank of Captain.
When WWII broke out, he volunteered to join  the Royal Air Force.
With the RAF, he was initially based in Wales where he trained young pilots. He survived the war because he was much more useful to the RAF as an instructor than to fly on missions. ( A pilot’s life expectancy was less than four months, or five missions at the time).
Nevertheless, he went on at least two bombing raids in Germany.
Arabic Radio Berlin branded him a traitor and  bad-mouthed him on several occasions. A few days before the Farhud massacre in June 1941, a firebomb was thrown at his parents’ home in Baghdad. His parents had to go and live with relatives. On the day of the Farhud, the mob broke into his parents’ home and looted everything, leaving the house stripped bare.
He had some expertise with bombs and he was sent to North Africa to investigate why certain bombs did not explode on impact.
From there he is believed to have visited  Baghdad. His nephew Sass remembers that Nagi stayed with  his family and the Regent sent a magnificent bouquet of flowers. Nagi went to see the Regent to “pay his respects”.
He was also sent on  a secret mission in Spain. He went there as an Iraqi civilian using his Iraqi passport. He never gave away any detail of this mission to anyone. He is thought to have visited Baghdad from there too. 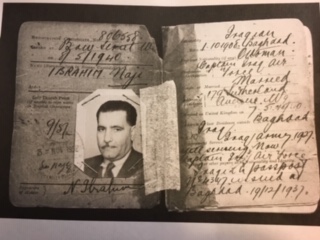 Nagi’s ID
Nagi was highly decorated and received medals both from the Iraqi and the British armed forces. King George VI of England awarded him a medal and an Administration Certificate.

Nagi was decorated by both Britain and Iraq
Nagi retired from the RAF with the rank of Squadron Leader. He was working in the Ministry of Defence in London toward the end of the war and for a short period after the war. The RAF wanted him to stay on but he decided to quit.
On leaving the RAF after the war, he acted as an intermediary for British companies seeking to do business in Iraq. He knew both Salih Jabr and Nuri Said (senior Iraqi politicians) . He was a close friend of Nuri Said’s son (they may have trained as officers at the same time). Initially this work earned him a magnificent house in Wimbledon (London). Following the Kassem revolution in 1958, his finances deteriorated but he still carried on this sort of work. He maintained his contact with the Iraqi Embassy in London and helped very many Iraqi Jews with passport matters.
His wife,  a child bride, was very beautiful.  They had no children and separated in the mid 1960s. He had little to do with Israel but was very proud of its achievements.
He died in 2008 just short of his 100th birthday.  In his last days, in a London hospital, the staff treated him with respect and insisted on calling him The General.
There are plans to turn Nagi Dabby’s story into a film and  to display his medals  at the Babylonian Jewry Heritage center in Israel.