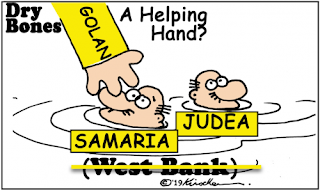 President Trump’s Proclamation on Recognizing the Golan Heights as Part of the State of Israel (Proclamation) could have important implications for America’s future policy regarding territorial claims by the Jewish people in Judea and Samaria (West Bank).

Trump first signalled America was voting against the United Nations long-held position on the Golan Heights – when US Ambassador to the United Nation Nikki Haley declared on 15 November 2018:


“The annual United Nations resolution entitled “The Occupied Syrian Golan” is scheduled for a vote on Friday, November 16. In previous years, the United States has abstained from voting on this resolution. However, given the resolution’s anti-Israel bias, as well as the militarization of the Syrian Golan border, and a worsening humanitarian crisis, this year the United States has decided to vote no on the resolution.
“The United States will no longer abstain when the United Nations engages in its useless annual vote on the Golan Heights. If this resolution ever made sense, it surely does not today. The resolution is plainly biased against Israel. Further, the atrocities the Syrian regime continues to commit prove its lack of fitness to govern anyone. The destructive influence of the Iranian regime inside Syria presents major threats to international security. ISIS and other terrorist groups remain in Syria. And this resolution does nothing to bring any parties closer to a peace agreement. The United States will vote no.” 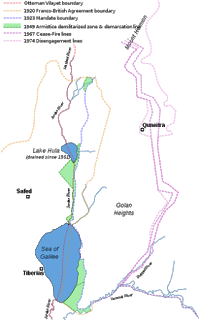 The United Nations’ designation of the Golan Heights as “The Occupied Syrian Golan” clearly signalled the UN’s total rejection of any Jewish biblical, historic and legal claims in the Golan Heights.

Part of the Golan Heights had been originally included in the territory of the Mandate for Palestine in the 1920 “Franco-British Convention on Certain Points Connected with the Mandates for Syria and the Lebanon, Palestine and Mesopotamia”.

This Convention established a joint commission to settle the precise details of the border and mark it on the ground. The Commission submitted its final report on 3 February 1922 – reducing the area of Palestine by placing all of the Golan Heights within the Mandate for Syria and Lebanon. The 1923 Paulet–Newcombe Agreement was subsequently signed by the British and French Governments confirming this and other boundary adjustments.

Trump could well turn his attention now to recognising the legal right of Jews to live in Judea and Samaria.

has similarly signalled the UN’s rejection of the Jewish peoples’ right to “close settlement” in Judea and Samaria  – expressly recognised in article 6 of the League of Nations Mandate for Palestine and preserved until today by article 80 of the United Nations Charter.

Another Trump proclamation acknowledging the legal right of Jews to live in Judea and Samaria could happen at any time – irrespective of whether Israel has passed any law similar to that passed on 14 December 1981 declaring that ”the law, jurisdiction and administration of the state shall apply to the Golan Heights.”

Such a Trump proclamation would blunt the rising tide of rabid Jew-hatred within the United Nations, UNESCO, the United Nations Human Rights Council and the European Union resulting from these institutions having failed to acknowledge such vested Jewish rights under international law.

The Jewish people worldwide owe President Trump a huge debt of gratitude for championing and defending their right to reconstitute the Jewish National Home in the Golan Heights – and hopefully soon – in Judea and Samaria.

Author’s note: The cartoon — commissioned exclusively for this article — is by Yaakov Kirschen aka “Dry Bones”- one of Israel’s foremost political and social commentators — whose cartoons have graced the columns of Israeli and international media publications for decades. His cartoons can be viewed at Drybonesblog