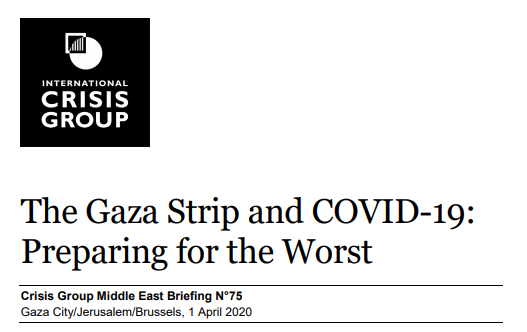 The Gaza Strip and COVID-19: Preparing for the Worst

What’s new? COVID-19 cases have appeared in the Gaza Strip, where close to two million Palestinians live in 365 sq km, many of them in crowded refugee camps where social distancing is hardly feasible.

Why does it matter? A major outbreak of the illness would swiftly overwhelm Gaza’s health care system, which has been devastated by years of war and Israeli blockade. The death toll could be horrific.

What should be done? The Hamas government should maintain its quarantine measures and step up other efforts to contain the virus’s spread. Israel should lift the blockade for medical supplies and allow Palestinians out of the strip should they require hospitalisation.

The report itself includes lots of footnotes to prove its point. Unfortunately the facts are overwhelmed by anti-Israel propaganda and falsehoods. Here’s just one paragraph, footnote in italics:

After Hamas assumed control of the strip in 2007 (following elections the previous year), the Israeli government imposed a blockade that continues to severely restrict the movement of people and goods into and out of the territory.  Apart from devastating the economy – in what the UN has termed a form of collective punishment – the blockade has crippled Gaza’s health care sector.
In 2018, the UN reiterated that “Israel’s 11-year-old air, sea and land blockade has driven Gaza’s social and economic conditions steadily backwards. This amounts to the collective punishment of the two million residents of Gaza, which is strictly prohibited under the Fourth Geneva Convention”. See “Closure of Gaza commercial crossing: UN expert calls on Israel to reverse decision”, UN Office of the High Commissioner for Human Rights, 13 July 2018.

Yet that UN report linked to in the footnote, written by rabid anti-Zionist and terror supporter Michael Lynk, says the opposite!

GENEVA (13 July 2018) – A UN human rights expert has called on Israel to reverse its decision to close the Kerem Shalom/Karm Abu Salem commercial crossing into Gaza.
The Israeli decision, announced on 9 July, prohibits the import of everything but food, animal fodder, livestock, fuels and medical supplies into Gaza, and bans all export from Gaza. Israel imposed these new restrictions in response to burning kites being sent by Palestinians into southern Israel from Gaza.

Even during an assault on Israeli civilians with incendiary devices dropping all over the south, Israel still didn’t restrict medical aid – but the ICG uses that as proof that its does, today!

The next sentence of the report shows that this isn’t a one-off mistake:

The World Health Organization has said that, while Israel generally allows pharmaceuticals and disposables to enter Gaza because of their humanitarian nature, Israel has either delayed or prevented the import of medical equipment, consumables and spare parts.
See “Medical Equipment in Gaza’s Hospitals”, World Health Organisation, July 2009. From the blockade’s early days, the WHO has accused Israel of limiting access to proper medical supplies and spare parts, with the result that most of the equipment in Gaza is broken or outdated. “WHO: Israel-led blockade limits medical supplies in Gaza”, Haaretz, 30 July 2009.

Eleven year old reports are being used as proof of what Israel is doing today. In 2009, Israel was still formulating the rules of what to allow into Gaza without endangering Israelis and what the procedures would be. Those procedures have evolved over the years to facilitate entry of equipment that was previously delayed. Today is nothing like 2009.

ICG realizes that, and goes on:


These accusations have persisted. In 2018, the UN urged Israel to stop preventing the entry of humanitarian aid and medical supplies to the besieged strip. See Bel Trew, “UN urges Israel not to withhold aid from Gaza, as crisis deepens”, The Independent, 23 August 2018.

That article does not say one word about Israel limiting medical supplies! It does say that there is a shortage of such supplies, but that was entirely because the Palestinian Authority – which is responsible for medicines in Gaza hospitals despite Hamas’ coup – actively decided to limit medicines and other critical products from Gaza.  ICG mentions this in the next paragraph so it clearly knows about the PA’s role in limiting medicine – yet it still blames Israel based on zero evidence, only a poor reading of newspaper articles and NGO reports that imply but do not show that Israel imposes restrictions.

For example, Israel does not permit the import of hydrogen peroxide, a medical disinfectant, noting that it can also be used in explosive devices. “List of ‘Dual Use’ Items”, Coordinator for Government Activities in the Territories (COGAT), 2008.

If you look at the document they mention, it says that hydrogen peroxide with concentrations above 18% are prohibited – and for good reason, because mixing high concentrations with acetone can create a very easy to build explosive. Hydrogen peroxide to treat wounds is typically at 3% concentration; hydrogen peroxide cleaning products for hospitals are even less, so as far as I can tell there is no valid medical reason to allow higher concentrations of H2O2 into Gaza.
ICG then goes on to quote Amnesty and others claiming that Israel has targeted hospitals in the past, falsehoods that I have debunked many times, one at a time, showing how every one was targeting a valid military target that was using medical facilities as cover.  It is also irrelevant to the discussion. In addition, ICG repeats the B’Tselem lie about Israel dismantling a medical clinic in the West Bank without noting COGAT’s debunking.

What about the ICG recommendation that Israel allow Gaza Covid-19 patients to be treated in Israeli hospitals? It’s own report shows that this can only happen at the expense of Israel treating its own citizens!

Even if Israel opened all its hospitals to Palestinians in Gaza who require hospitalisation without caring for its own citizens, it would be able to accommodate only 5,000 of the most severe cases.  As a state comptroller’s report explained, Israel’s own health system is underprepared and overstretched.  A former commander of the Coordinator of Government Activities in the Territories (COGAT), the Israeli army unit that deals with civilian needs in the West Bank and Gaza, said: “Israel cannot be blamed, [as] Israel is suffering already from this virus”.

If Israel would follow the recommendations in the report, it would result in many Israelis dying to save the lives of people who consider Israel their enemy. Why a nation sacrificing its own people to help those who want to destroy it is a moral decision is not explained.

One other issue not mentioned in this report is that Egypt, also on the border with Gaza, is not called upon to open its crossings to help fellow Arabs. Only Israelis are expected to do that.

It is most disappointing that an organization that clearly has access to the facts still says untruths.

No one wants an epidemic in Gaza. Israel is doing everything it can to minimize the chances of that happening without putting its own citizens at further risk. Anyone who says otherwise is not stating facts but parroting propaganda.

I don’t know anything about the ICG’s politics, and I hope that this poorly written report is more a reflection of unconscious bias than an attempt to smear Israel. We’ll know soon enough if they issue corrections.