If Not Now tweeted this graphic: 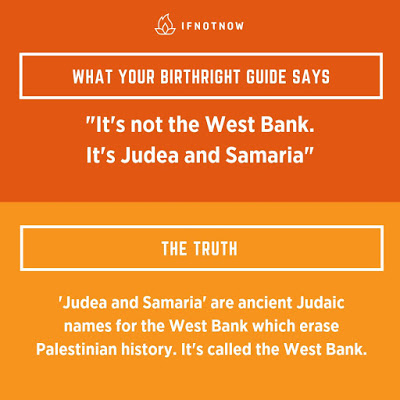 So the original name for the areas is meant to erase the history of the one that came thousands of years afterwards.
Beyond the stupidity of that assertion, the West Bank is a Jordanian name, not a Palestinian name. (The term was not consistently capitalized until after the Six Day War.)
Even the UN referred to Judea and Samaria when talking about the area, e.g., the UN partition plan of 1947 saying “The boundary of the hill country of Samaria and Judea starts on the Jordan River at the Wadi Malih south-east of Beisan…”
The format of this infographic indicates that IfNotNow has an entire series of them that they were planning to tweet daily.  But the derision they have received for this one may make them bury the rest of them. Too bad! Debunking them is one of my new favorite hobbies.
I’m still hoping against hope that they say that the name you should use is Al Quds instead of Jerusalem.