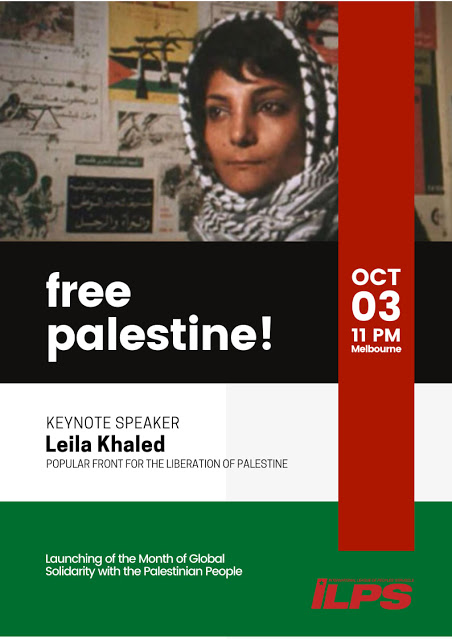 This October, the ILPS, its member organizations, country chapters, and allied networks will be launching a month-long campaign of Global Solidarity with the Palestinian People.
As part of the Month of Solidarity, the ILPS will deal with issues such as the recently announced Imperialist/Zionist annexation plan, the history of Israeli colonialism and apartheid, the rejection of agreements of humiliation and “normalization” between Zionism and some Arab countries, the global campaign to return to Palestine, support for the Intifada, the liberation of the Palestinian people, the unified capital of Palestine, the illegal Israeli occupation of Palestine and so on.
We are inviting everyone to tune in to the launching of this campaign on OCTOBER 3, 11 PM Melbourne time. Our keynote speaker is no other than Palestinian woman activist Leila Khaled, from the Popular Front for the Liberation of Palestine.

For some reason, no Zionists are trying to “censor” this event. In fact, no one really cares. The problem with Khaled is when respectable institutions give her respect.
Interestingly, San Francisco State University specifically told the organizers of their Khaled webcast not to mention the PFLP, under the pretense that she was speaking in a private capacity, in their attempt to avoid violating US anti-terrorism laws.  The ILPS, on the other hand, is proud to trumpet Khaled’s active ties to terrorism.
In fact, the webinar registration form starts off with “The International League of Peoples’ Struggles (ILPS) stands in militant solidarity with the Palestinian people,” leaving no doubt of their support of terror. To Khaled’s fans, her terrorism and her support for violence is a feature, not a bug.
It would be a shame if Zionists would treat this webinar the way that Israel-haters treat pro-Israel events, by disrupting it and putting the organizers on the defensive. But if something like that should happen, it would be amusing to see if the ILPS response would be one that supports free speech.