Another round in the ‘hummus wars’, this time on Twitter, where Arabs accuse Israelis of ‘cultural appropriation’ – or even ‘cultural genocide’. The truth, as readers of this blog will know, is the exact opposite. Seth Frantzman reports in the Jerusalem Post: 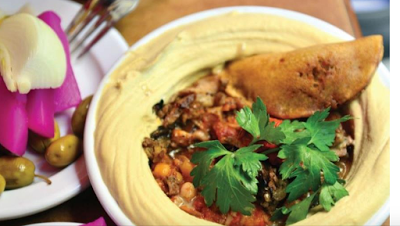 In a Twitter battle that raised eyebrows on both sides of the Atlantic, James Zogby accused Israel of “cultural genocide” after American celebrity cook Rachael Ray posted a photo of “Israeli nite,” with hummus, stuffed grape leaves and other edibles.

Wrote Zogby, “This is cultural genocide. It’s not Israeli food. It’s Arab (Lebanese, Palestinian, Syrian, Jordanian). First the Israelis take the land and ethnically cleanse it of Arabs. Now they take their food and culture and claim it’s theirs too! Shame.”

Bret Stephens, op-ed columnist at The New York Times and a former Jerusalem Post editor-in-chief, joined the battle on Tuesday. “Please tell me this is a joke tweet,” he wrote. “Or is it ‘cultural genocide’ when Arabs use Israeli technology? Do you use Instant Messaging? Waze? If so, please stop.” Waze was invented in Israel.

Zogby responded that the case would only be similar if he used Waze and then claimed it was Lebanese. Zogby’s father was a Lebanese immigrant to the US.

“This isn’t a joke. It’s about a history of cultural appropriate and a systematic effort to erase Palestinian history and culture,” he claimed. There was a ray of hope. “Peace is possible, but not on those terms.”