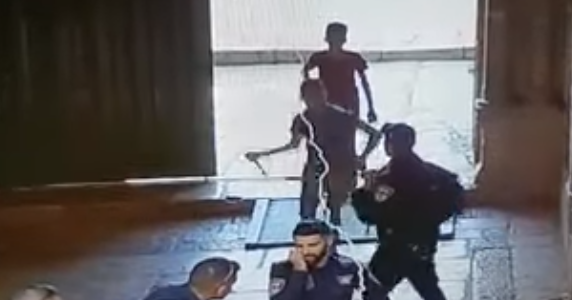 Despite dramatic video footage, yesterday’s attack by two Palestinian minors on police at a gate to the Temple Mount is barely being covered in international media.

AFP reported it this way:


Two Palestinian youths attacked Israeli police with knives in Jerusalem’s Old City on Thursday before being shot by officers, leaving one of the assailants dead, officials said.

Israeli police said an officer was moderately wounded and that the two assailants were shot.

The Palestinian health ministry said one was killed, while Israel’s Shaare Tzedek hospital said the second was left in critical condition.

Another person in the area was injured in the leg, police said, without providing further details.

What practically none of the reports mention is that the two youths attacked the police from the Al Aqsa Mosque compound itself, as the video clearly shows.

Even the Jerusalem Post says the attack happened “at one of the walled Old City’s gates,” as if it was at the entrance to the Old City, not to the Temple Mount.

As far as I can tell, only Arutz-7 got it right.

This is why the Israeli police closed the Temple Mount briefly. It was the source of the attack. But Arab media and Palestinian officials condemned the closure without noting this fact that it was where the knife-wielding youths came from.

Ironically, Electronic Intifada ended up showing better than anyone that Israeli forces only kill people who are direct threats:

Six Palestinians killed this weekEighty-one Palestinians have died by Israeli fire so far this year, and six since Saturday.

One of the men had crossed the boundary “and fired at troops and tossed a grenade,” the Israeli military said.

The following day, Israeli forces killed another Palestinian who shot at soldiers while he attempted to cross the Gaza boundary.

EI absurdly complains about yesterday’s attack, “The officers immediately open fire on the boys, and do not appear to attempt to subdue them with nonlethal means.” As if any police officer in the world would respond differently to himself or a colleague being stabbed repeatedly.