The headlines we see now are apocalyptic – and yet familiar.

In the beginning of April, Peace Now wrote,  “[Any] Unilateral move could frustrate the Palestinian street and drag the area into another round of violence, as senior security officials have repeatedly warned.”

Indeed, Haaretz had this headline this weekend:

How many times have we been warned about the threat of the “Palestinian street” exploding? Quite a few.

Middle East Eye in 2017, warning of dire consequences from a US embassy move to Jerusalem: 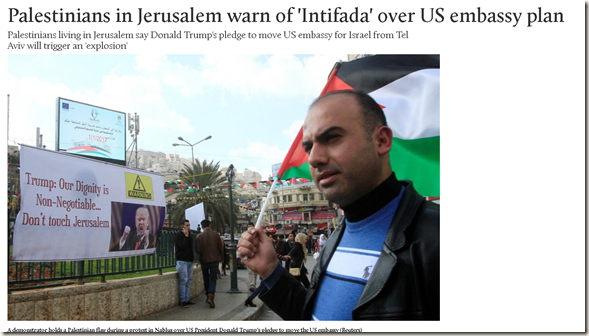 Also in 2017, a warning about an impending holy war after clashes in the Temple Mount from a professor of global affairs: 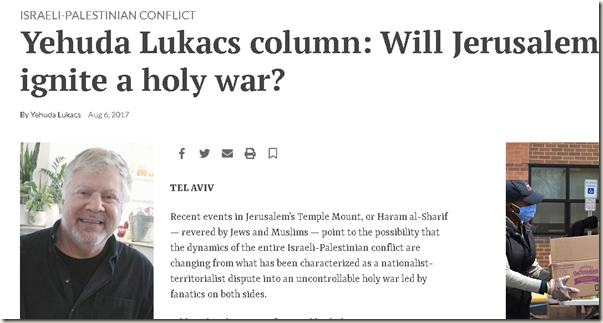 In fact, predictions of an upcoming uprising are almost a cliché. Noga Tarnopolsky catalogued a bunch of them in 2014:

“For a while now I’ve wondered why there’s been no Third Intifada,” New York Times columnist Tom Friedman mused, in a Feb. 4 column entitled “The Third Intifada.”

In February 2013, a full year before Friedman, Amira Hass, the Palestinian affairs correspondent for Israel’s daily Ha’aretz, published a column entitled “Why hasn’t a third intifada broken out yet among the Palestinians?” (Despite ripe conditions, she posited, the answer was “a lack of faith” among Palestinians in their leadership.)

In September, Moussa abu Marzouk, a senior Hamas official, predicted on his Facebook page that “We are facing a political failure for the Palestinian Authority and the beginning of a new popular intifada against Israel.”

In October, Al Jazeera wondered “Is a Third Intifada in the Offing?”

In November, at a moment of some frustration with Israeli Prime Minister Benjamin Netanyahu, US Secretary of State John Kerry fumed “I mean, does Israel want a third intifada?”

A few days later, the veteran Israeli Arab affairs specialist Shlomi Eldar published an analysis explaining why “Despite despair, no signs of third Palestinian intifada.” (With memories still relatively fresh from the Second Intifada, in the first half of the 2000s, Eldar explained, it is not what Palestinians want.)

Then, in December 2013, when the third intifada had still failed to materialize, Hess published another column, a sort of primer telling readers “How the third intifada will start.” (Any random act of violence against Palestinians could be the spark, she said.)

The arrival of 2014 didn’t seem to change journalists’ minds.

In January, sources within the Palestinian Authority leaked to Israeli media an “internal document” foreseeing — yes — “a third intifada.”

Academia got into the game, with Tel Aviv University posting an exhaustive but inconclusive inquiry that posed the question “Is a Third Intifada Brewing?”

Jump ahead to this week, and the crisis in the Palestinian-Israeli peace talks. The British magazine The Week described the situation in a column entitled — you guessed it — “Fears of third intifada as Middle East peace looks hopeless.”

This is not to say that Palestinians aren’t prone to violence. They are, which is why these predictions all seem to safe for “experts” to make. But no one predicted the “knife intifada” of 2015-16, for example, even after Mahmoud Abbas himself essentially called for it in September 2015 by saying that Palestinians must use any means necessary to “defend Jerusalem.”

In fact, the occasional outbreaks of deadly violence by Palestinians are rarely predictable. They are essentially random. A small incident can seem to spark a significant flare-up while things that seem to be major rarely result in anything beyond threats.

But despite years of showing that the threats of violence by Palestinian leaders almost never actually result in violence, the “experts” consistently believe them. This is how Palestinian leaders try to use the fear of another intifada to get their own political goals met. This is a variant of a century-old Muslim model I called “The Diplomacy of Fear” back in 2006.

The corollary to these constant, dire predictions is that Arabs will not react violently if Israel or the West just does what they want. This is just as false as the predictions of a new intifada are. Arab violence is unpredictable as it is inevitable, but it has little correlation to Western actions, even though people who want to see a logical world will believe such correlation as causation after the fact.  Exhibit One is the certainty that so many experts have that Ariel Sharon’s visit to the Temple Mount caused the Second Intifada when that uprising had been planned for months beforehand.  An excuse is not a cause.

Once one realizes that there is no correlation between the regular Arab threats of violence and actual violence, then it becomes apparent that the fear of such violence is not a rational reason to act in one’s best self-interest. Violence will happen regardless, and for reasons that cannot be predicted. It will not be stopped by goodwill gestures just as it will not be started by Israel or the West doing things that Arabs warn against.

There are some serious people who have serious reasons against Israel applying sovereignty over parts of the territories. The debate is important and worthwhile. But history shows clearly that the Arab threats of violence is not a factor in this decision, and the sooner that these threats are discounted, the sooner the Arabs will stop using those threats as an alternative to actual negotiations.

Treating these threats of violence as if they are rational and not mafia-style attempts at extortion is a real obstacle to peace.