For Jews in Iraq, a wolf’s tooth was a popular good luck charm. It inspired Carol Isaacs, an artist and musician, to produce an original graphic memoir, accompanied by live Middle Eastern music. The Wolf of Baghdad will have its premiere on 21 November in London for the 5th Memorial Day to remember Jewish Refugees from Arab Countries and Iran. (Booking link here) In her animated presentation,  Carol imagines herself travelling back with the wolf to her family’s roots in Iraq, and explores the complex relationship of second-generation Jews in the West with their Mizrahi origins.  Rebecca Taylor interviewed Carol for Jewish Renaissance. 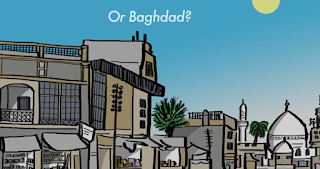 Where do I belong, London or Baghdad? Video clip here.

RT: Did you grow up being aware of your Iraqi background?
CI: No, my parents didn’t talk about it. I started playing music when I was four years old, but if I think about music in my parents’ house, it was classical. In Baghdad they were very Europeanised. Theywore European clothes and had European names. I never heard any Arabic music in the house.

My father would have passed as a British gent. He went to his office in the City
in a pinstriped suit, with arose from the garden in his buttonhole. The only vestiges of Iraq were in the food. My mother was a fantastic cook– she made great bourekas.

My father also often had non-Jewish business associates who came to visit from Iraq. Then you really felt you were in Baghdad because they brought
presents – sometimes gold – and they talked all night with my family about
what was going on back home. On those occasions I felt as if I lived in two worlds. 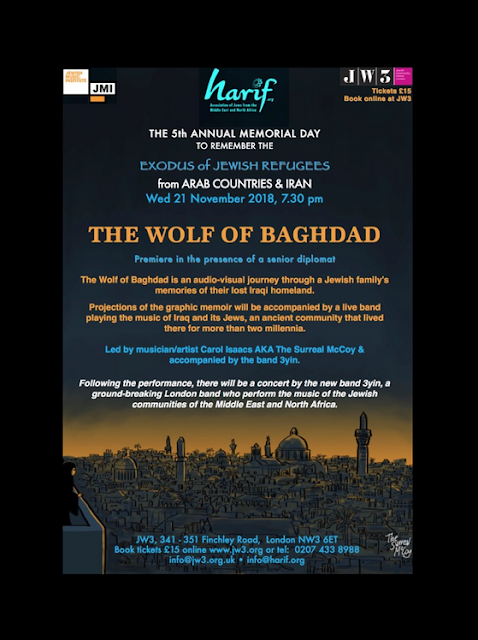 RT: Do your Iraqi roots influence your own music?
CI: The Wolf of Baghdad will be shown on screen at various events in the
autumn and my band, 3yin, will accompany some of the screenings. For this project I play Arabic accordion. I’ve had to learn how to playmusic using the Arabic scale, which gives a different feel than a Western one. It’s
like learning a whole new language. It’s very special. It’s funny going back to learn this music that I never thought had any relevance to me. Now I see that it has. It’s important to preserve it. (…)

RT: Would you like to go to Baghdad?
CI: I have mixed feelings about the place. All my life I’ve known that the Iraq that my family has spoken about with such affection is not there any more. Our houses are gone, the cemeteries are gone. There is one hidden synagogue that is looked after by some Muslim residents. There is nothing left of that former life. That’s what the memoir is addressing: on the one hand, why would I want to go back? On the other hand, I have that longing for a place I don’t know. It’s something that many second generation immigrants have.