TOP NEWS
http://jewishrefugees.blogspot.com/2020/11/how-arabic-speaking-israelis-are.html
In the wake of the Abraham Accords and intense interest among Arabs in Israeli life, a group of  Arabic teachers and speakers in Israel is building bridgewith the Arab world. Makor Rishon has the story:

Before Omar Adam sunbathed on the shores of Abu Dhabi and winds of peace blew from Sudan, a group of women began working on social media to train Arab hearts to normalize with Israel. With the help of food, poetry, art and fashion, and especially a simple discourse on everyday life, the past and the future, they create a dialogue with citizens of Arab countries who seek contact with the Jews and Israel, and encourage civic connections between us and them.

While their trend seems to be conquering the Middle East, and the old hatred of Israel is loosening even slightly, we met with some of them to hear how to do it. Or rather, how to do.
Moran Tal, an Arabic teacher in high school, a resident of the center of the country – sings in videos that she uploads the songs of Umm Kulthum, Farid al-Atrash and Faiza Ahmad to Twitter, and tries her voice in contemporary hits as well. It has over 15,000 followers, many of them from Arab countries, who follow it, watch, comment and distribute. “I sit with my family at the table, and at the same time correspond with people from Dubai, Kuwait, Iraq and Bahrain,” she says. “I have received responses from the Iraqi beauty kingdom, I am being followed by ambassadors of Arab countries. I even correct errors in Arabic of annoying tweeters.” 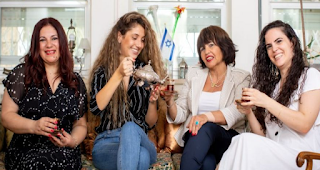 Smadar Alani, 49, runs the Facebook page “Mazat al-Wassel” (“The Linking Link”), which has almost 8,000 surfers of Iraqi origin. “As an Israeli, I do not interfere in Iraq’s internal affairs and I do not deal with sensitive political content,” says Alani. “I try to focus on culture, literature, music and friendship, any content that produces a bridge. I will bless them with their holidays and name ours.” She also, she says, incorporates music in her posts, which is very powerful on networks. Hopefully the spirits of peace will reach them as well. A tour of Israel for Iraqi residents.
Sapir Levy, a 25-year-old student, works in the Department of Digital Diplomacy of the Ministry of Foreign Affairs, in an Arabic industry led by Yonatan Gonen. Among other things, she is part of a team that operates the “Israel in Arabic” and “Israel in the Gulf” Twitter accounts, and through them encourages support for the latest policy developments. One of the important tools for this, she says, is the study of the Hebrew language. “This is the new trend. We saw interest in Hebrew even before the agreements, which of course increased the desire of our followers to learn the language. “Their progress in knowing the language. It’s a real pleasure.”
I meet them in a spacious house near Jerusalem – the house of Linda Manuhin ‘Abd al-‘Aziz. Menuhin greets us with a big smile, pastries and her Iraqi daughter poured into small glasses of glass, and the four of them sit down to chat with me in the sunny corner in the center of the house, on nice chairs. “We call this corner the ‘Iraqi Dream,'” Menuhin says, laughing a rolling, contagious laugh. “Even as a student at a school in Iraq, they knew I was not allowed to be laughed at,” she apologizes.
“As soon as I started laughing – the whole class would join in, including the teacher, and the lesson would be over.” Her father, Adv. Yaakov ‘Abd al-‘Aziz, was a well-known figure in the Jewish community in Baghdad. On the eve of Yom Kippur 1973, two years after his daughter immigrated to Israel, he disappeared. Today, at the age of seventy, Menuhin is a veteran of these warriors. , Has been running Facebook, Twitter and Instagram pages, and has been advising the State Department for eight years. “I am in charge of the Iraqi Facebook page launched by the ministry. Today we have about half a million positive and positive followers.
Apart from that I have a Facebook page with thousands of followers called ‘Jola Iraqi’, in which I invite Iraqis to travel in Israel with Jews from Iraq. So far I have had two such trips, and the experience has been amazing. I have another Facebook page with 8,000 followers, ‘Shadow in Baghdad’, which tells about my family in Iraq – the Farhud, my father’s disappearance, and the connection between the Jews and the rest of the population.
Read article in full