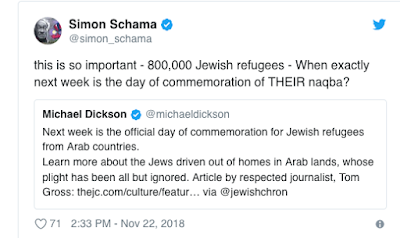 Prominent historian Simon Schama on Friday tweeted a call for commemorating the expulsion of over 800,000 Jews from Arab countries that followed the creation of the State of Israel in 1948. (with thanks: Avril)

“This is so important — 800,000 Jewish refugees — When exactly next week is the day of commemoration of THEIR naqba?” Schama asked, using the Arabic word for “catastrophe” commonly used to describe the experience of Arab refugees during Israel’s 1948 War of Independence. 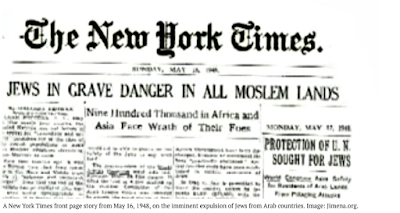 Schama’s acclaimed recent book and TV series, “A History of the Jews,” includes a detailed account of the uprooting of Jewish communities from North Africa to Yemen, in which he contrasts the silence around this question with the attention given to the Palestinian issue. November 30 — a week from today — is marked in Israel as an official commemoration of the expulsion of the Jews from the Arab countries and, later, from Iran.