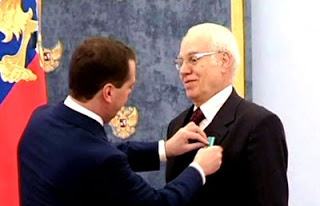 In 2012, the ADL condemned Russia awarding the Pushkin Medal literary award to a Syrian writer, Ali Ukla Ursan, who had expressed antisemitic beliefs and supported the 9/11 terror attacks.

They quoted Ursan as saying “The covetous, racist and hated Jew Shylock who cut the flesh from Antonio’s chest with the knife of hatred, invades you with his money, his modern airplanes, his missiles and his nuclear bombs.”

Now Ursan has outdone himself in antisemitism. In a screed published in Al Watan, Ursan starts off with


It is not surprising that the Zionist racists are rooting and renewing their terrible crimes, ready to re-establish their criminal history, against the so-called “goyim,” Christians and Muslims in particular. But the silence the world on all of this, this terrible racist crime, represented by the Israeli occupation of Palestine and its criminal practices, is surprising and insulting and condemnable.

Ursan eventually gets to his real point:

And “Bibi”, located in the center of the celebration, participating in the anniversary of the end of the Great World War. For this occasion he celebrated the Nakba of innocent Palestinian Arab blood, to drink there…The Zionist racists are celebrating their religious feasts, where they make their unleavened bread on the high holidays, thoroughly soaked in the blood of the Goyim. The terrible incident that took place in the “Bab Touma” neighborhood of Damascus, is still in memory. On February 6, 1840, Eid al-Fitr,  two innocent human members of the “Goyim = the Gentiles” Padre Tomasso, a Christian cleric and pharmacist, followed by Ibrahim Amara, were massacred by the people of the Bibi Netanyahu…On the evening of the festive day, on Sunday 11/11/2018 (Bibi celebrated) with the blood of “Goyim = Gentiles” of Muslims in the Gaza Strip, Mohammed Baraka, and the Mujahideen al-Qassam Brigades: Muhammad Majid al-Qara, Alaa al-Din Fawzi Vseifis, Mahmoud Attallah Musbah, Mustafa Hassan Abu Odeh, Omar Naji Abu Khater and Khaled Muhammad Qweider from the Salah al-Din Brigades.

In a column last month Ursan describes “Zionists” (obviously meaning Jews) by saying “they have chosen to lie down in the ladder of human decay by disguising themselves as a common human being……They are racist killers, spoilers in the land through history…”