Check out this abstract of a paper published at the Middle East Journal of Culture and Communication by Atef Alshaer, who lectures at the University of Westminster and who wrote this while at the School of Oriental and African Studies, University of London:

This article sheds light on poetry written by two of the most prominent leaders of Hamas, assassinated by Israel in 2003 and 2004, respectively: Ibrahim al-Maqadmah and Abdel Aziz al-Rantisi. Both leaders took part in the creation of Hamas and propagated its ideology in political, cultural and other fields. Poetry, being the premier form of artistic expression in the Arab world, is used by the leaders of Hamas to present their experiences in Israeli prisons, and their vision and involvement in the Palestinian struggle. The sentiments that their poetry expresses, reveal deep and nuanced cultural, political and philosophical dimensions. The poetry of Hamas can be characterized as one of commitment, suffering, pain, longing, defiance, and certainty.

The paper is even worse, as Alshaer refers to the murderous leaders of Hamas as “intellectuals” who suffered a “cruel fate”:

See? Israel doesn’t target Hamas terrorists who blow up buses and pizza shops with women and children – it targets Palestinian intellectuals!
The entire paper is filled with love of Hamas and denial of its violent nature. In this section, Alshaer claims that Rantisi only wants peace, a desire frustrated by Israel:

In these lines, al-Rantisi shows an existential paradox, wherein Palestinian lives have been disrupted and deprived of normality: on the one hand, there is the desire to live in peace and to see fulfillment of one’s needs and desires, and on the other, there are the forces which have rendered impossible the fulfillment of these needs and desires. Confronted by this dilemma, al-Rantisi chooses to resist injustice.

“Justice,” of course, is the destruction of Israel.

Rantisi’s poem urging his son to take up violence is interpreted romantically by Alshaer:

Better to die than to live as a coward… here you are rotting in a prison with no price/ tomorrow you die, and you will be buried/ O, pity on me, to whom you would leave your sons/ and the wife you will leave behind to wolves…I fear that you would be exiled tomorrow/ you would leave your house derelict; complain over the ruins/ you search for a trusted friend/ to cry for you or share the suffering with you…I forewarn you my son not to bow to an idol, not to return the sword to the sheath/ go in life as you like; I would not be satisfied with such a life without struggle.

This is a moving poem, clouded by paradoxes and occasional mysteries, such as when he fears that his wife would be left to wolves if he dies. Wolves are depicted as representing the ultimate danger; he understandably is racked with worry over the state of his wife and his sons if he is not to be with them. Here, the poet depicts himself as ‘the man, guardian, of the house’ who ensures the safety and security of his family. But finally, Al-Rantisi beckons his son not to give up: what is at stake deserves sacrifices; not doing so would be tantamount to surrendering to the forces that deny Palestinians a life of dignity and peace.

The keywords that Alshaer uses to describe this paper shows his romanticizing of the terror group:

Alshaer, who clearly shares Hamas’ philosophy, does admit that Hamas’ poetry proves that Hamas is not interested in peace with Israel but in creating an Islamic state:

[W]ithin the grand scheme of Hamas’ ideology, an independent Palestinian state is only a stepping stone towards the realization of a larger Islamic polity that would encapsulate territories larger than Palestine, and ultimately culminates in an Islamic caliphate.

This guy is teaching swooning college students how wonderful Hamas is. 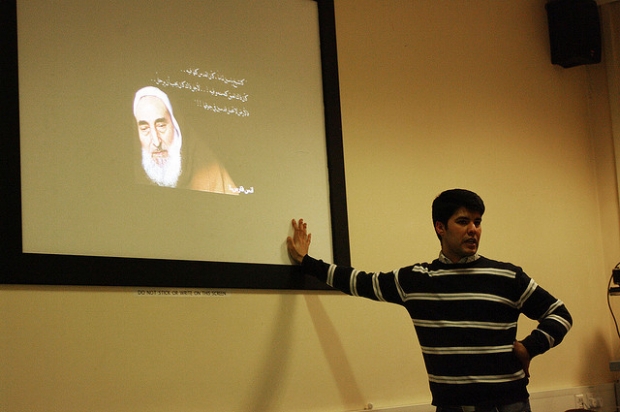