TOP NEWS
http://elderofziyon.blogspot.com/2020/09/hanan-ashrawi-talks-about-israel.html
On Saturday, tens of thousands of Christians gathered at the Washington Mall for Franklin Graham’s Prayer March.
The people moved to seven different iconic locations, like the White House, the Lincolm Memorial, the World War II Memorial and the National Archives, with specific prayers at each stop.
None of the prayers were political.
One person noticed a superficial resemblance between the worshipers who gathered at the base of the Washington Monument and how Orthodox Jews pray at the Western Wall in Jerusalem, and tweeted this disparaging note, gathering thousands of retweets: 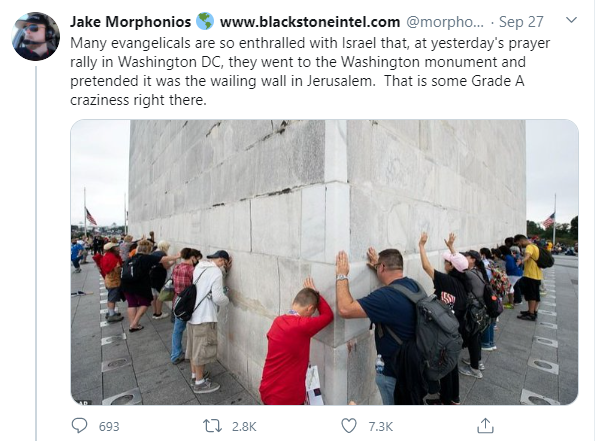 This  tweet is complete fiction. None of the Prayer March literature, either before or after the event, references the Kotel or even Israel in any way. The Washington Monument is simply the only “prayer point” where people could gather that has a flat wall where people could approach it directly for prayer.
Keep in mind that the tweet is insulting to Jews as well as evangelicals. Jews never call the Kotel the “Wailing Wall,” a purely 20th Century British term, and that characterization is considered derogatory nowadays.
None of this stopped PLO spokesperson Hanan Ashrawi from adding further insult to this lie, with a sarcastic tweet that moves from the antisemitic meme of Jews occupying the US government to calling the Washington Monument a “phallic symbol.” 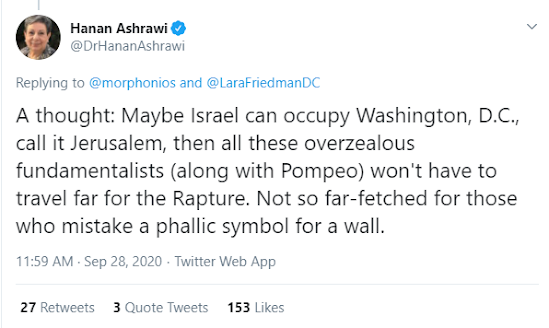 White supremacists often refer to Washington as the “Zionist occupied government,” or ZOG, and Ashrawi can hardly be unaware of her use of the word “occupy” in this context.
And while it is hard to deny that the obelisk has been seen as a phallic symbol for centuries, and the Washington Monument is the world’s largest obelisk, that was not its original meaning when used by the ancient Egyptians (unlike some explicitly phallic Greek architecture.)
Ashrawi in one tweet insults the United States and Jews while using a white supremacist dog-whistle.
(h/t Yoel)