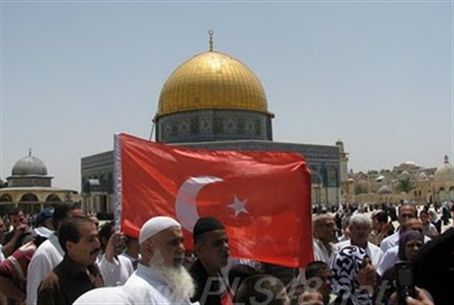 The conversion of Hagia Sophia back into a mosque was a spectacular move. Some saw this change in the status of this publicly accessible site with its magnificent art, frescoes and architecture as sacrilege, but for Turkish President Recep Tayyip Erdoğan, it constituted a “resurrection”, indeed, a “harbinger” for the liberation of the next holy site, the Al-Aqsa Mosque in Jerusalem.
When proclaiming this mission, Erdoğan used the Turkish term “Mescid-i Aksa”, which, similar to the Arabic term “Al-Masjid Al-Aqsa”, has long meant not only the mosque but the entire Temple Mount. Another reason why the term is preferred to “Al-Haram Al-Sharif” (venerable sanctuary), which was once in common use, is because it is mentioned in the Koran in connection with Muhammad’s Night Journey from Mecca to Jerusalem.
This rhetoric is intended not only to make Muslims more aware that the Temple Mount in Jerusalem is the third holiest place in Islam; its consistent use is in fact part of a global Muslim campaign to guard the site against Israeli control.
Turkish Islamists joined the campaign years ago and can be assured the support of the Turkish state and foundations close to it. The fact that the call to “liberate Al-Aqsa” – which was long heard in such circles – is also being voiced by the Turkish head of state himself, has elevated the mission to official Turkish state ideology.
Erdoğan’s rallying cry regarding Al-Aqsa is being spread via all possible channels. On the day of the re-consecration of Hagia Sophia, the words were already emblazoned on posters put up in various cities by the “Turkish Youth Foundation”, which has close links to the state. Activists from the foundation, on whose board of directors Erdoğan’s son Bilal sits, distributed sweets to mosque visitors and passers-by, who congratulated them on the “resurrection” of Hagia Sophia – and the imminent “liberation of Al-Aqsa”.
…
…
The Turkish Al-Aqsa campaign serves in part to spread state-prescribed Neo-Ottomanism. The Istanbul-based association “Mirasimiz” (Our Heritage) strives to “protect and preserve the Ottoman heritage in and around Jerusalem”. Mirasimiz sees the restoration of sacred buildings dating from the Ottoman era, which the association supports financially and logistically in cooperation with the Turkish Agency for Cooperation and Coordination, as cultural resistance to the Israeli occupation and the progressive “Judaisation” of East Jerusalem.
The association’s journal, Minber-i Aksa (Al-Aqsa Pulpit), repeatedly draws attention to the Ottoman heritage in Palestine, and in the case of the Temple Mount, it goes overboard in glorifying the achievements of Ottoman rulers there as builders and guardians of the sanctuaries. The small buildings left by the Ottomans there are often featured in the journal.
No mention is made, however, of the way that the Al-Aqsa Mosque and the Dome of the Rock were severely neglected in the late Ottoman period. Instead, an article in the latest issue of Minber-i Aksa reports in detail on the restoration work carried out on the Al-Aqsa Mosque, focusing in particular on the efforts undertaken from 1922 to 1925 by Mimar Kemaleddin, a Turkish architect who was trained in Berlin. The account fails to mention the Egyptian and British experts who were also deeply involved in the project, emphasising instead how Kemaleddin was honoured by the British for his work.
The “Minber-i Aqsa” association, likewise based in Istanbul, has also played a prominent role in the Turkish Al-Aqsa campaign – just one of a growing number of government-affiliated organisations and media initiatives in Turkey committed to an Islamic Jerusalem. For the last three years or so, “Minber-i Aqsa” has been trying to recruit legal scholars from as many Islamic countries as possible for the Turkish campaign. At an international conference on the subject in Istanbul in the summer of 2018, which attracted 400 participants, the city’s Mufti, Hasan Kamil Yilmaz, conjured the vision of a new Saladin who would soon set out to liberate the “usurped” city of Jerusalem.
The Istanbul mufti may well have had Erdoğan in mind here, but so far, state officials and AKP functionaries have refrained from comparing Erdoğan to Saladin. When the AKP politician and director of the district administration of Iznik (Bursa province) Halil Ibrahim Gökbulut quoted Erdoğan’s Al-Aqsa slogan while speaking to the faithful before the reopening of Hagia Sophia as a mosque, he referred to the Turkish President as “Saladin of the Umma” (Saladin of the community of Muslims), the opposition Kemalist newspaper Sözcü deemed it sensational.
On Turkish social media, however, the Saladin analogy is already widespread among AKP supporters – as is the dismay this vision generates among their opponents.