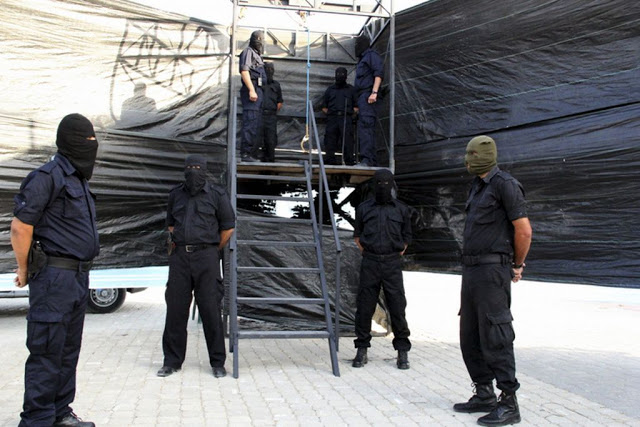 
Hamas executed three people reportedly by firing squad and hanging this morning, in a move that defied protests from the UN and will likely deepen tensions with the Palestinian government in the West Bank.

The Islamist group, which has controlled the Gaza Strip for more than a decade, said it had executed three alleged murderers at dawn.

The executions were not carried out in public even though Hamas had threatened public killings when it announced the death sentences earlier this month.

Two of the men were shot dead by firing squad while a third, a policeman, was hanged, security sources told Reuters.

The group said earlier this month that it has 13 people on death row and intended to carry out further executions.

While the executions weren’t public, they did take place in front of the families of their victims. They had the right to pardon the murderers from execution but refused to do so.

Here is one of the rare cases where human rights groups actually denounced Hamas, mostly because they are against the death penalty altogether and they couldn’t find any legal loopholes to let this slide, as both HRW and Amnesty try to do with other cases of Hamas (and Hezbollah) crimes.

The rule from Amnesty and HRW is that they only condemn Hamas when Hamas freely admits to violating international law, as they do with rockets and executions. Israeli officials are assumed to be liars but Hamas officials’ lies are accepted as truth.

So don’t be fooled by condemnations of Hamas by these human rights NGOs. They are happy to find isolated cases where they condemn Israel’s enemies, so they can claim that they are equal in their criticisms as they issue about 6 anti-Israel reports for every one on Israel’s enemies.