Fifty years after the last Jews were driven from Libya,  Dr David Gerbi, representing the World Organisation of Libyan Jews, calls for justice and the rights of Libyan Jews to be included in a new constitution. The right to return is one of them. (Gerbi famously was thrown out of the country after trying to re-opem a Tripoli synagogue. ) Article in Libyan Express (with thanks: Gideon): 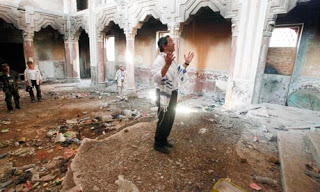 David Gerbi praying in the Dar al Bishi synagogue, Tripoli before he was driven out of Libya

The WOLJ call the authorities of the GNA, the Parliament, the leader of Benghazi governments, to respect the rights and heritage of Libyan Jews and how they should be secured by the new constitution on the issue of Libyan Jews that has been forgotten for fifty years (1967 – 2017).

Libyan Jews have the right to return to their ancestors’ hometowns in Libya to visit and to pray for their dear one and to receive back their properties and to demand their compensation of the private and public property that has been confiscated since 1967, when the last 5000 Libyan Jews became refugees in Italy, USA England and other countries.

We call US, UN, Italy, France, England and the three governments to recognize the rights of Libyan Jews.

We Demand justice by the International Courts: We call to the UN for the importance of the respect of universal human rights and the freedom of religion.
Today there are no Jews in Libya because of the persecution, the pogroms, the intolerance and the racism that force the Jewish community to leave the country in 1967 when because of the six days’ war between Israel and Arab countries, the last 5000 Jews has been forced to leave to Italy Israel USA and England in order to save their lives.

1967-2017 fifty years pass and the historical unresolved conflict is still not addressed nor is it resolved by the international community and by Libyan government and we have become the forgotten refugee that lost everything but not the right to fight for justice, the faith and the dignity.

We started from below zero and today thanks G.D and our resilience we rebuilt our life with honesty and we live with dignity in democratic countries that respect the human rights and the freedom of religion. But we still want justice and reconciliation through the apologies and the compensation of our property and for the fifty years of suffering.

We are still committed to support the respect of universal human rights and the respect of freedom of religion also in Libya. We are still committed to fight against discrimination, racism and antisemitism also through the education of the young people that has been brainwashed through the culture of hate and racism.
We ask that the legacy and the interest of the Libyan Jewish refugee be remembered as it happen in july 2016 between Mr Kobler and Dr Gerbi in Tunis in UNSMIL office.

We have museums of Libyan Jews and we have personal testimonies of Jews from Libya, we did it in order in order to preserve our history and heritage.
We have a museum to offer information and documentation on Jewish refugees from Libya, we conduct public education programs that provide historical perspective, in the pursuit of truth, justice and reconciliation.

The return is not a requirement and demands but it is a fateful and humanistic right. We have Jews that live in peace in Morocco, in Tunisia, in Egypt, in Iran. They can choose to live there or to leave their country where they were born. There is a freedom of choice and we seek this basic freedom.