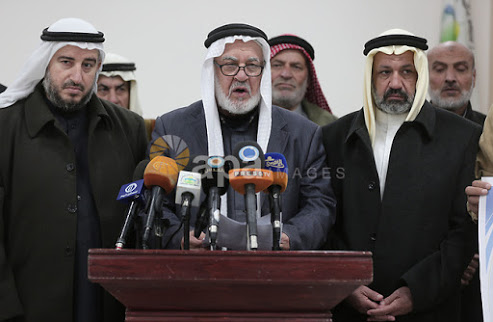 The Palestine Scholars Association in the Gaza Strip issued a statement that says that normalization with Israel is a “religious and humanitarian crime, national betrayal, a stab in Arabism and complete bias towards the enemy.”
This came during a meeting today at its headquarters in Gaza, with the title: “Normalization in concept, destiny and legal rule,” with the participation of scholars, legal judges, university professors, and the International Union of Muslim Scholars, Palestine Branch.
The head of the Palestine Scholars Association, Marwan Abu Ras, added in the statement, “This is beyond the issue of recognition and relationships, but rather it is complete loyalty to the enemies of God and blatant hostility to Muslims, a conspiracy against sacred things and a violation of sanctities, and the promotion of cultures and the glorification of Jewish beliefs and Talmudic hysteria.”
He continued: “Thus, the ruling is greater than being merely forbidden and a great sin. Rather, it is affection for the enemies of God, and denial and hostility to the believers.”
“In summary, God Almighty has judged those who support the unbelievers over the believers that he has severed his relationship with God.”
This doesn’t sound political at all.
(archive photo above)