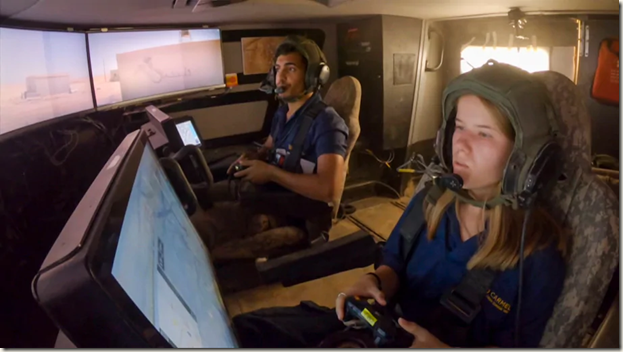 From the gaming magazine Kotaku:


Israel is currently testing a new armored vehicle prototype that uses a wide array of modern technology, most notably an Xbox controller that allows soldiers to perform combat functions as if they were playing a video game.
…
The only open conflict in which Israel currently finds itself is against the people of Palestine, many of whom are essentially confined to regions run like open-air prisons. They cannot travel freely. They are second-class citizens. Their protests against these conditions are met with overwhelming aggression by the IDF, which even targets children and medics while violently shutting down dissent. When global organizations like the United Nations take steps to curtail Israel’s human rights abuses, the United States is quick to step in and block them.
That’s all to say that we shouldn’t be making it easier or more comfortable to kill someone. The more we make war like Call of Duty, the more removed humans will be from the act of killing. The monitors and controllers that fill these vehicles serve as much as a barrier between the user and the people outside as the vehicles’ armor does. In the Carmel tank, we see the perfect encapsulation of concerns brought up during previous integrations of gaming technology with military equipment: weaponizing the inherent desensitization of video games to turn young men and women into more capable and efficient killers.
As weapons of war have become more sophisticated, so too have the ways in which world governments shield soldiers from the psychological reality of taking another human life. By combining this remove with the familiarity of a video game controller, armies are turning a hobby we love into a de facto training exercise, getting younger generations ready to mow down children or fight in the next world war. We should not be inured to this; we should be horrified.

The writer, Ian Walker, breezily refers to Israel as an “apartheid state” so he is not exactly the most objective writer. But this is what happens when Israel haters push their venom into venues where people aren’t familiar with the facts and can easily be brainwashed.
In fact, as the original Washington Post article about this made clear, the US has been using gaming controllers in various weapons systems for years. If you are in a war, you want every advantage, and using an interface that soldiers are already familiar with is a way to make weapons safer, not more dangerous. Walker knows literally nothing about actual warfare and he apparently thinks that his playing war games on XBox make him some sort of expert.
In fact, Israeli soldiers know more about international humanitarian law than Walker can ever hope to know. The IDF spends millions to avoid innocent casualties. The propaganda that Walker so easily repeats from his forays into anti-Israel sites are lies, but they are lies that his magazine is not likely to catch and edit.
Walker purposefully did not quote the parts of the Washington Post story that contradicts his twisted propaganda agenda:


Critics of the intersection of gaming and war have pointed to the potential desensitizing effect that games could introduce to an arena with lethal consequences. Seeking to fight potential blurring between video games and real life war, Shabtai’s team opted against a virtual reality system with goggles and for an interface that requires a shared sense of reality with other people.
“When you’re dealing with the battle arena itself, you can’t be alone,” Shabtai said. “You’re not fighting in an aircraft, you’re on the ground, with other forces and another team member, everything needs to be connected.” The AI system also integrates weapon selections based on myriad circumstances, he said, giving the example that it would not present the operator with a missile option to respond to a single enemy shooting a rifle from a populated area.
Friedman said the distinctions are very clear. “It’s not being at home, eating and drinking and having fun. This is work,” he said. “There’s also the way [Carmel] moves, the noise it makes, it’s very different from a video game.”

In other words, the Israeli designers specifically thought about Walker’s scenario and mitigated that issue. Walker chose not to mention that, because his article is meant to portray Israelis as bloodthirsty killers, not moral human beings.