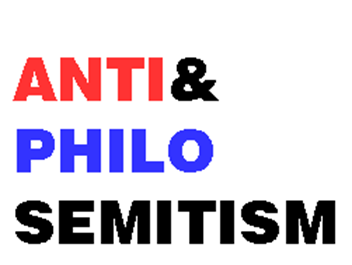 Many critics of Israel (and others) say that philosemitism is just a form of antisemitism.

I disagree. Two recent examples of seeming praise for Jews shows how to tell the difference between true admiration for Jews and fear of Jews.

Judaism is a closed, non-missionary religion that does not promote conversions and refuses to engage in it. Numerical abundance does not occupy a position, interest or goal in the Zionist thought and planning.

No Jewish rabbi calls anyone in the world to convert to Judaism.

The number of Jews in the world is around 14 million, but their financial, electoral, political, media, scientific, and industrial influence is increasing exponentially.

Jews in the world are closer to the party, organization, and system run by the World Jewish Council and their lobbies scattered around their places.

This organization is based on a culture of solidarity, support, and sympathy for the center of the Jews – Israel, the state of all Jews, which constitutes the first investment destination for wealthy Jews who own 10% of the world’s billionaires’ fortunes, which are achieved by their domination of the knowledge economy, which they manage almost entirely.

Jewish organizations strongly support youth initiatives and innovation, which has achieved fortunes that exceed all the wealth of all Arab countries combined, two to three times!

The number of Jews in the world is about 14 million, making up only 0.2% of the world’s population.

Despite the minuscule number of Jews, they have influence that they control in most parts of the world.

More than 80% of the top American managers are Jewish or married to Jews.

According to the Center for Arab Gulf Studies, 3 million Jews possess more than the budgets and incomes of 152 countries in the world!

The place the Jews have achieved is proof of the need to focus on quality rather than quantity. And proof that many of us will not liberate Palestine.

Here we remember Lenin’s saying: “Give me a dozen men and I will change the world with them.” That dozen of men really changed the world.

Is this article philosemitic? Not at all.  It is meant to teach Arabs the supposed Jewish strategy of taking over the world so the Jewish plans can be learned from.

But how can you tell when praise of Jews comes from admiration and when it comes from fear and hate?

In late March 2019 Stephen Lamonby, 73, a part-time lecturer at Solent University, remarked to a colleague, Dr Janet Bonar, that people from different countries had become good at certain things owing to “high exposure”.  He said that Germans are good at engineering because they are “exposed to a high level of industry from an early stage in their lives”. When Dr Bonar, a US-born engineering lecturer, mentioned her degree in physics, Mr Lamonby said that Jewish people had “a particular gift” for the subject. He used Albert Einstein as an example and asked Dr Bonar if she was Jewish. She took offence and called Mr Lamonby a racist. He replied: “I believe that the Jewish are the cleverest people in the world. They are much maligned because of it. I asked if you were Jewish because of your ability with maths/physics et cetera. Which is a speciality of theirs.”

Here is a non-Jew who said that Jews are good at physics, offending his supervisor when he asked if her skill in the field perhaps comes from her being Jewish.

What differentiates Ad Dustour’s praise of Jews from that of Dr. Lamonby  – or Donald Trump?

The answer is quite simple.

People who view Jews as an implacable enemy want to learn their “secrets” from a distance. They want to use secondary sources to learn about Jews, but they don’t want to deal with them directly.