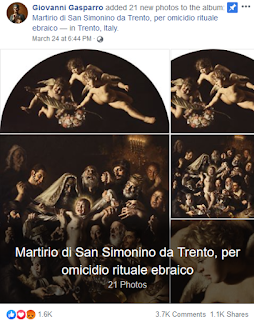 The 15th century case of Simon of Trent was one of those periodical ritual murder accusations that wrought terror on Jewish communities and stain the history of the Catholic Church. Supposedly kidnapped and ritually sacrificed by Jews (confessions were obtained under torture), the alleged child martyr became the focus of a cult, and was eventually beatified, but never canonised.

In 1965 Pope Paul VI removed Simon of Trent from the roll of the Roman church’s martyrology.

But how persistent is the discredited cult of “St Simon of Trent”, with all the abtisemirism that cult historically entailed, can be seen in the painting by Giovanni Gasparro and the reaction of its admirers in social media.

A skim of the artist’s Facebook page testifies to the antisemitic scum who have gathered to praise the painting and attack, often in the most virulent terms, mock and bait anyobe, especially anyone perceived to be Jewish, who expresses dismay at the painting.

Since Simon of Trent was never canonised, and since he was removed ftom their church’s martyrology on papal authority, the adulation got Simon, and the artist’s depiction of him, from the keyboards of the apparent Catholics among the commenters is surely sacrilegious.

Below are sample comments screenshot by me as I trawled the artist’s Facebook page last night.  They are a mere fraction of the thousands upon thousands  of comments made, but they give an idea of the vile  attitudes that exist in some quarters towards Jews, and which, 75 years after the liberation of Auschwitz, are not ashamed to be expressed in public.

Note, although not prevalent in my sample, that haters of Israel who want to see that little country wiped off the map are also represented, and there is the inevitable sprinkling of Muslims and of “Christians” who for some unfathomable reason prefer the presence in Europe of Islam to that of the Jews. Ignorance, both of Judaism and Jewish history, is a widespread characteristic: I even noticed some apparent Teutonic types taunting a Jew with a Germanic surname for appropriating such a name from their culture: the dolts are apparently unaware of how surnames came to be imposed upon Jews! 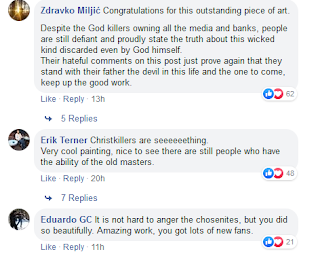 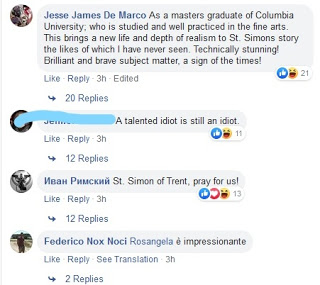 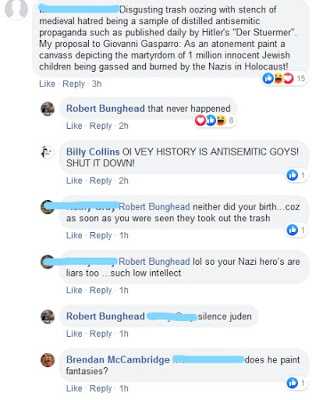 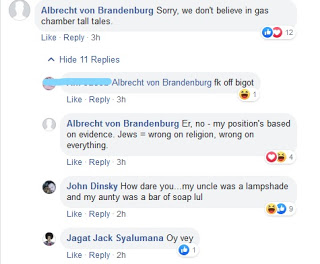 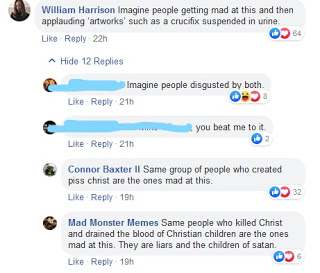 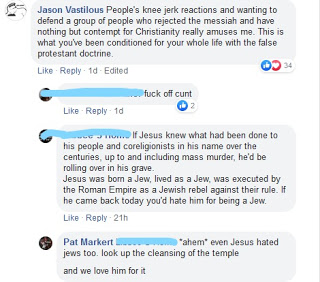 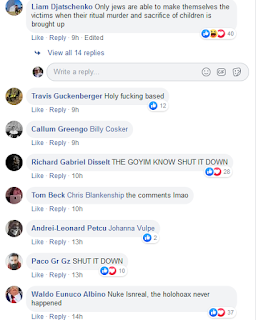 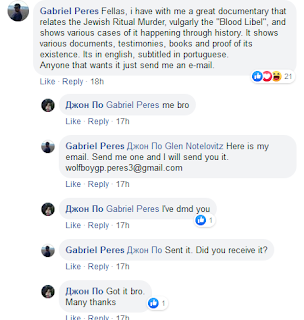 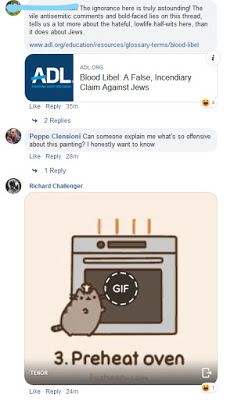