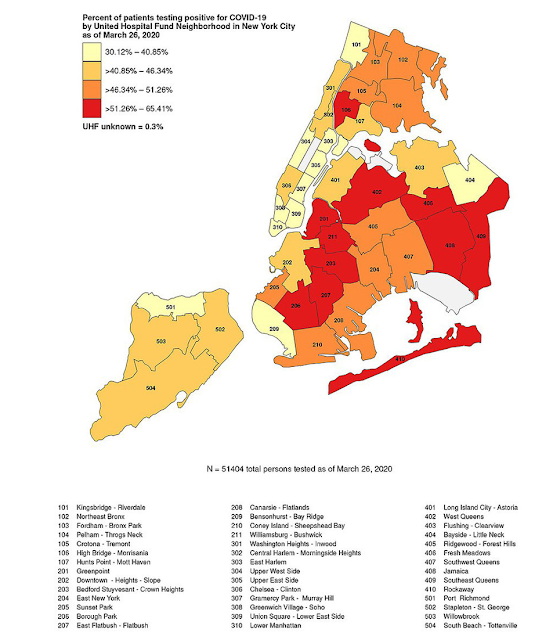 Every single New York neighborhood with a large religious Jewish population has the highest percentage of patients testing positive for the coronavirus, according to this map published by the NYC Department of Health.

Looking at New York State as a whole, the heavily Jewish Rockland County has a higher percentage of COVID-19 cases per capita than New York City (as far as I can tell, second only to Westchester County.)

Even though Orthodox rabbis across the board closed down all schools and synagogues before the government authorities said to, the sheer amount of interaction that religious Jews have with their communities – often going to prayer services 2 or 3 times a day, and this year especially celebrating Purim (March 10) together with friends and family, made Orthodox Jewish communities Ground Zero for the coronavirus. This was not helped by the refusal of a small minority to shut down their synagogues and cancel wedding parties – stupid, selfish decisions that are ensuring that the numbers continue to grow as we approach the two week mark since rabbis first called for the shutdowns. There were reports that some Jews still insisted on praying with others as recently as Friday.

Only this week will we begin  find out the effectiveness of the shutdowns that started on March 12 in Teaneck/Bergen County and then spread across the region in the following week.

Every day we learn about more and more people we know, or in our circles, who have gotten ill or passed away. Often they are community leaders – rabbis and others – whose jobs involve close interaction with their followers.

It is a very scary time, and the worst is still to come.

And those who continue to pretend to be “frummer” by still praying with a minyan/quorum are playing Russian roulette with their families, and everyone else’s lives.