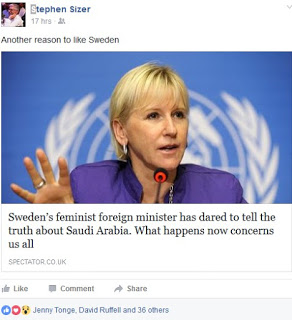 As I understand the matter, our old friend the soon-to-be-ex Vicar of Virginia Water gave an undertaking to his bishop that he would cease to mention the Middle East on social media or immediately resign his pulpit.

Our old friend has seemingly forgotten that undertaking in his eagerness to bring this tribute to Sweden’s ghastly foreign minister Margot Wallstrom to the attention of his faithful.  After all, the article says, inter alia:


‘….It is a sign of how upside-down modern politics has become that one assumes that a politician who defends freedom of speech and women’s rights in the Arab world must be some kind of muscular liberal, or neocon, or perhaps a supporter of one of Scandinavia’s new populist right-wing parties whose commitment to human rights is merely a cover for anti-Muslim hatred. But Margot Wallström is that modern rarity: a left-wing politician who goes where her principles take her.

She is foreign minister in Sweden’s weak coalition of Social Democrats and Greens, and took office promising a feminist foreign policy. She recognised Palestine in October last year — and, no, the Arab League and Organisation of Islamic Co-operation and Gulf Co-operation Council did not condemn her ‘unacceptable interference in the internal affairs of Israel’. I confess that her gesture struck me as counterproductive at the time. But after Benjamin Netanyahu ruled out a Palestinian state as he used every dirty trick he could think of to secure his re-election, she can claim with justice that history has vindicated her.

She moved on to the Saudi version of sharia law. Her criticism was not just rhetorical. She said that it was unethical for Sweden to continue with its military co-operation agreement with Saudi Arabia. In other words, she threatened Swedish arms companies’ ability to make money. Saudi Arabia’s denial of business visas to Swedes threatened to hurt other companies’ profits too. You might think of Swedes as upright social democrats, who have never let worries of appearing tedious stand in the way of their righteousness. But that has never been wholly true, and is certainly not true when there is money at stake….’

But it’s not that apparently forgotten undertaking that I refer to in the header.  It’s the fact that the vicar, like Jenny Tonge, who also likes the tribute to Wallstrom, has apparently forgotten that Iran (whose PressTV propaganda channel both he and the baroness have appeared on with, pardon the phrase, gay abandon, is every bit as oppressive to women as Saudi Arabia is.)

Wallstrom, like the other feministas in the Swedish government, whose hijabed heads and swatjed bodies were bowed before the mullahs recently, have of course conveniently forgotten it too.

I suppose that’s because Saudi Arabia is an ally of America and a de facto ally of Israel.  Eh, vicar?

Talking of Islam and women’s rights (or lack of them), a topic that has been making headlines in Australia over the past fortnight, as apologists for Islam present it as a harbinger of feminism (!), the VladTepes blog reminds us today of this Toronto imam, making sick, outrageous claims against Israel back in 2013.

To quote the uploader:


Shaykh Saed Rageah (الشيخ سعيد راجح) was born in Somalia and in the late 80sn moved to North America. Rageah has a Bachelor’s in Islamic studies and a Masters in Shari’ah and he has had several posts over the years, including: founder of Masjid Huda in Montreal and Masjid Aya in Maryland, advisor for Muslim Youth magazine, and member in the Aqsa Association.

He is also the founder of both Muslim Magazine and Al Aqsa Association, and served as the Chaplain at both the University of Calgary and the Southern Alberta Institute of Technology (SAIT). Currently, he serves as Imam at the Abu Hurairah Mosque in Toronto, the Chairman for the Journey of Faith Conference and as an instructor for the AlMaghrib Institute.

In a lecture delivered in Denmark (posted on Youtube on April 15, 2013) dealing with women’s right Shaykh Rageah asserted that Islam, unlike the Christianity and Judaism, dignifies women. Referring to Israel and the Jews in this regard Shaykh Rageah said the following:

Note that this is an excerpt of the original full length video which may be viewed here – https://www.youtube.com/watch?v=aBROa…