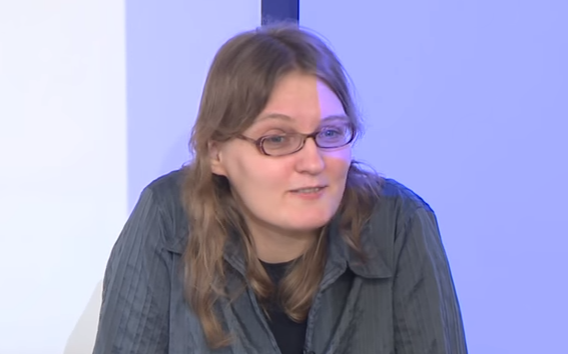 Bristol University is investigating claims of anti-Semitism after an article by one of its lecturers emerged, in which she says Jews should stop “privileging” the Holocaust.

Dr Rebecca Gould, a reader in translation studies and comparative literature at the elite Russell Group university, has been accused of using the “language of Holocaust denial”.

The university said they are “actively looking into this matter”, which first arose when an undergraduate penned an open letter to his lecturer last month, explaining his shock at coming across the article.

Sir Eric Pickles MP, who is the UK’s special envoy on post-Holocaust issues and a former Conservative Party chairman,​claimed it is “one of the worst cases of Holocaust denial” he has seen in recent years, adding that she should “consider her position” at the university.

Then came the backlash:

But now three professors have rushed to her defence, saying they see “no evidence” of anti-Semitism in the article.

Professor Gene Feder, Professor Havi Hannah Carel and Dr Tom Sperlinger Reader have written a joint letter to say they are “dismayed” at the criticism.

So was her article, entitled “Beyond Anti-Semitism,”  antisemitic or not?

By the definition of antisemitism that is accepted by the EU, it is.

Beyond that, it a violation of any sort of professional ethics.

Gould’s entire thesis is based on lies:

Elie Wiesel did the most to popularize the use of the Greek term holokaustos (“entirely consumed by fire”) to translate the Hebrew shoah. Already 20 years ago, the historian Arno Mayer contested the use of the term “holocaust” in lieu of the shoah, because he recognized that this word had spawned “a collective prescriptive ‘memory’ unconducive to critical and contextual thinking about the Jewish calamity.’ Unfortunately, Mayer’s protests have gone unheeded.

When the most religiously freighted term imaginable is used to describe a purely human tragedy, memory becomes an instrument of ideology rather than a means of connecting with the past. This problem is only exacerbated by the way “holocaust” implies divine ordination. Defining the shoah vis-a.-vis the Greek (and, incidentally, Christian) term for a sacrifice to God has helped make it available to manipulation by governmental elites, aiming to promote the narrative most likely to underwrite their claims to sovereignty. Claiming the Holocaust as a holy event sanctifies the state of Israel and whitewashes its crimes. As Mayer feared. it also forestalls objective critique of any group associated with those who were brutally “sacrificed” half a century ago.

Gould’s first false assumption is that the religious etymology of the word “holocaust” limits how the word can be used in historical context.  She offers no proof for this. Since the 1960s, the word has been used almost exclusively for the Nazi genocide of Jews and the earlier meaning has been all but lost; the word now transcends its etymology. If the word “Shoah” had been the word that took root fifty years ago instead of “Holocaust,” there would be no difference in how the word could be used today.

The claim that Israel claims the Holocaust as a “holy event” is simply not true, and Gould brings no evidence for her assertion. The Holocaust is a uniquely horrifying event but there is no religious connotation to it and there hasn’t been one since the term was coined – except, of course, for the religious dimension of the Nazi attempt to destroy the Jewish people.


Just as it is necessary to separate the past from the present in contemporary Israel-Palestine, so, too, it is necessary to separate Jewish suffering from the Palestinian crisis. One tragedy does not license another. The Holocaust does not license the Israeli occupation. Nor does it license the bulldozing of Palestinian homes or the razing of Palestinian land. To refuse the moral calculus that transforms Jewish suffering into a justification of Israeli oppression does not imply insensitivity to or obliviousness of what the Jews have faced over the course of their long, often devastating, history. Even less does it earn one the label of anti-Semite. Rather, it opens a post-Holocaust present to an ethics that looks beyond the “eye for an eye, tooth for a tooth” principle that has undergirded all three of the world’s most influential monotheisms – regardless of how they toss this label at each other, all have subscribed to such ethics in practice – at various moments in their history. Two wrongs do not make a right. Jewish suffering will never be appeased by making Palestinians pay the price for the world community’s silence half a century ago, when the Jews were being exterminated.

When does Israel use the Holocaust to justify defending itself from Palestinian terror? You might hear analogies between the Holocaust and the stated genocidal aim of Israel’s enemies, which are quite strong, but the basic assumption that Israel uses the Holocaust to forestall valid criticism is unfounded. No Israeli leader has ever said “we have the right to mistreat Arabs because of the Holocaust” and to claim that this is how Israelis think is simply slander. On the contrary, Israel’s treatment of Palestinians is far more careful and tentative than one can find any country treating those whom it is at war with. It isn’t Israel that puts Palestinians into concentration camps: it is Arab nations.

Gould’s article is bookended by an anecdote of a pro-Palestinian friend of hers who is afraid to criticize Israel because he doesn’t want to appear antisemitic. She takes that fear as fact and bases her thesis on it – but it is based on a false assumption to begin with. There are plenty of criticisms of Israel that are valid and that are not antisemitic.

Gould builds on her false assumptions:


The justification of silence regarding Israel’s illegal expansion in Palestine on the grounds that protest against this injustice could be perceived as anti-Semitic merely extends the lifespan of anti-Jewish prejudice.

Has there been silence regarding the “occupation?” I seem to remember that every nation on the planet has criticized it. Perhaps Gould missed that, plus the hundreds of UN and UNHRC resolutions, Human Rights Watch and Amnesty articles, and daily op-eds in Western media.

If her idea that there is “silence” on Israel’s actions is completely wrong, then that means that her thesis that this imaginary silence adds to antisemitism. The idea that relentless criticism of Israel out of proportion to its supposed crimes may be engendering antisemitism obviously did not cross Gould’s mind.

So far, it would be a stretch to call this article antisemitic. But her conclusion indeed reaches that level:

Israel must find a way of not passing on the crime the Nazis introduced into the world onto the next generation of its citizens. If Israel can find a way to stop the cycle of bloodletting released into the world over half a century ago, then, even in an era weary of nations and the states that underwrite them, it will merit the world’s admiration. As the situation stands today, the Holocaust persists and its primary victims are the Palestinian people.

This is antisemitism, despite the “if.” This paragraph tells the reader, only slightly elliptically,  that Israel is guilty of doing to the Palestinians what the Nazis did to the Jews, and that Palestinians are victims of the Holocaust via the proxy of the modern Israeli Nazis. Israel is repeating the “bloodletting” that the Nazis started, just this time the victims are the new Jews and the Israelis are the new Nazis.

To call Israelis Nazis is antisemitic and outrageous, and that is exactly what Gould is doing despite her wording that tries to make her accusation appear theoretical.

I am not going to weigh in on whether Rebecca Gould should be fired for this. What should definitely happen is that she must be exposed both as a person who glibly throws around antisemitic accusations, as well as an academic fraud who builds her case on her own hateful fantasies instead of the facts that academics are supposed to base their arguments on.

(There are other counterfactual points she makes in her article that invalidate her as an honest academic, such as invoking “millennia of harmonious Jewish-Arabic coexistence prior to modernity.”)