Fifty years ago, murderous riots broke out in Aden. History was repeating itself – over 80 Jews were killed in 1947. Robert Philpot describes the rescue of the remaining community, and how a British soldier helped save  Sefrei Torah in The Times of Israel.

Three Jews trapped in the Crater district of the port city were attacked by an armed mob; two were brutally murdered, the third was found alive but barely able to breathe. For those old enough to remember, history appeared to be repeating itself. Twenty years previously, in the wake of the UN vote to partition Palestine, Jewish businesses, stores, and homes had been attacked in Aden. Two Jewish schools were burned down. At the end of three days of violence in December 1947, more than 80 Jews were dead. “There were not riots but murder,” Joseph Howard, a child at the time, later remembered. A British commission of inquiry into the disturbances later found that “trigger happy” firing by soldiers of the Aden Protectorate Levies — an Arab military force trained and armed by the UK to protect its colony — were responsible for many of the Jewish deaths. These local forces, the inquiry concluded, were sympathetic to the rioters, and did not attempt to control them. The inquiry recommended British troops be permanently stationed in the colony. 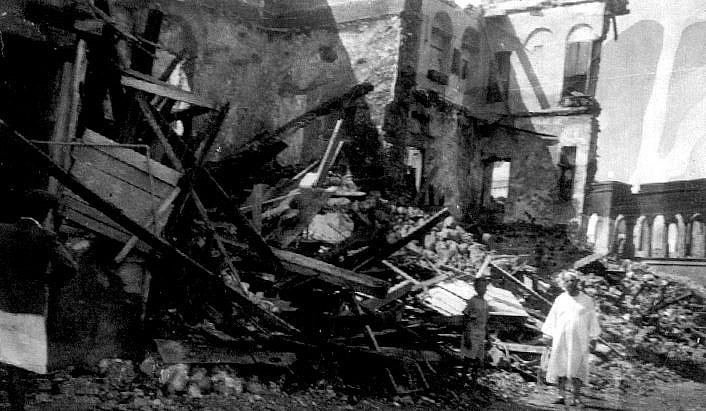 For Britain, which was urging Arab countries to protect their local Jewish populations at the very moment it had so conspicuously failed to do so, these events were a source of considerable embarrassment. In the summer of 1967, Britain had an opportunity to redeem itself.

The sun was finally setting on the British Empire; Harold Wilson’s government was readying to pull its forces out of Aden — one of the UK’s last remaining colonies — thus bringing to an end 128 years of British rule. The last four years of that rule — the so-called “Aden Emergency” — had been particularly bloody, as Britain and the army of its newly created Federation of South Arabia battled an insurgency led by the National Liberation Front (NLF) and the Front for the Liberation of Occupied South Yemen (FLOSY). By 1967, the Jewish population of Aden had dwindled to a mere several hundred compared to 4,500 in 1945.

As tensions across the Middle East rose in the weeks before the Six Day War, there were attacks on Jewish homes and shops. With the outbreak of the conflict, Jews crowded into Tawahi — a suburb of the main city which was home to the British governor and one of the safest places in Aden — where they sheltered under the protection of British troops.

One of those soldiers was 24-year-old Dougie Skilbeck. Fifty years on, he reveals a remarkable tale of kindness and bravery which perhaps helped to bring the final chapter of Britain’s relationship with the Adenite Jews to an honorable close. Despite his youth, Sergeant Skilbeck was hardly a rookie.

Hailing from Yorkshire in the north of England, he joined the Lancashire Regiment at the age of 15. By the time he arrived in Aden in early 1967, he had already served in Swaziland, then a British colony in southern Africa. The soldiers had been provided with little information about the embattled Jewish population and Skilbeck was initially unaware of any tensions. He remembers the city being initially “quite peaceful and quite fun,” before the situation turned “bitter.”

Based at Radfan Camp in the desert, Skilbeck’s platoon was charged with guarding the Jewish population and helping to prepare their evacuation, which was being arranged in London by Barnett Janner, a Jewish Labour MP and former president of the Board of Deputies of British Jews. Skilbeck remembers many of the Jews living in the back of shops in Tawahi or at the Jewish-owned Victoria Hotel, as they waited to be airlifted out.

The atmosphere was “extremely tense and awful for the Jewish population,” he says. “They had been targeted by the Arabs and some of them had been humiliated and even murdered.” But as they prepared to leave, some of the Jews had unfinished business to attend to. They turned to Skilbeck for help. The day before the evacuation, he was approached by a rabbi. “He pleaded with me to help him save the holy scrolls,” Skilbeck recalls.

The mission was fraught with danger; the scrolls were in Crater, by now controlled by NLF and FLOSY guerillas and thus not only a no-go zone for Jews but also for British troops. Skilbeck and another British soldier agreed to help. His reasons were simple: his first army tour of duty was in Germany and he was stationed at the same barracks where his father had been at the end of World War II.

“I knew a lot about what happened to the Jews in Germany and I felt a lot of sympathy … [seeing] the Jews persecuted once more. Foolish or not, I was a young man but I wanted to help if I could,” says Skilbeck.

At nightfall, the two British soldiers, the rabbi and two Jews who were accompanying him set off for Crater. By now off duty, Skilbeck drove the unmarked military minibus which he had borrowed for the “totally unofficial” assignment.

Unaware of the route, he was directed by the rabbi. < Luckily, the minibus was not stopped at either of the military checkpoints which it passed through on the “extremely tense” 30-minute journey. “We could have been ordered to turn round or taken back … Seeing the machine gun laying on our laps, they could easily have opened fire on us not knowing who we were,” says Skilbeck.

When they arrived, Crater was shrouded in darkness and appeared virtually deserted. They stopped at the synagogue — which the locals had tried unsuccessfully to break into —  and he stood guard outside while the other men went in. At this point, Skilbeck admits, he began to wonder: “What am I really doing here? Why am I doing this?” His unease only grew when he heard a voice from across the street asking: “What the fucking hell are you doing here?”

Skilbeck is puzzled to this day about who it belonged to, but suspects it may have been a member of an SAS unit — Britain’s elite special forces — who were still operating in Crater at the time. About 20 minutes later, Skilbeck heard a machine gun firing blindly and bullets whizzed past him down the street.

The group had saved three scrolls and wanted to save more, but scrambled into the minibus and raced back to Tawahi. Looking back as they made their escape, the men saw that the synagogue had started to burn.

“We were extremely lucky and God must have been on our side,” Skilbeck believes.