On Facebook, CAABU (the Council for the Advancement of Arab-British Understanding) founded in 1967 to turn British public opinion against Israel, condemns an “Islamophobic” letter it’s received from a Brit, but fails to explain exactly what is wrong with the assumptions given in the letter.

If its “educational programme” is, er, honest, so, surely, on many of those assumptions, must it fail. 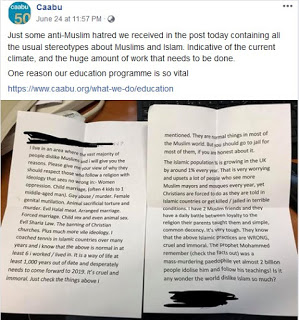 Meanwhile, as this video shoes:


“Clashes broke out between protesters and Israeli police near a checkpoint in Bethlehem on Tuesday as hundreds of demonstrators took to the streets to protest against the US’ Israel-Palestine peace plan, as a US-led workshop aimed at discussing the US $50 billion proposal with regional leaders kicked off the same day. Dozens of protesters were reportedly injured in the clashes. One injured protester was seen being carried to ambulance. Footage also shows demonstrators putting a noose around US President Donald Trump’s effigy before setting it on fire. Protesters also pasted pictures of Trump and Crown Prince of Saudi Arabia, Mohammad Bin Salman on a donkey before parading it through the streets. The so-called ‘Deal of the Century,’ which was unveiled by the White House on Saturday, promises to create 1 million new jobs for Palestinians and lists 179 possible infrastructure projects, including a highway between the West Bank and Gaza. However, the proposal has been met with hostility by Palestinians frustrated by the discounting the possibility of returning to their former homes.”

Read all about it, and see many photos with translated captions, here: 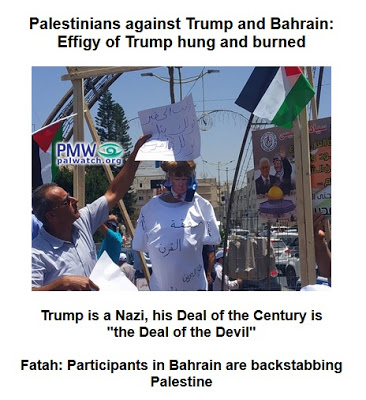