The parking lot is open, but the escalators aren’t working yet at Atarot Mall, a new, two-floor, NIS 200 million ($54 million) mall built by supermarket king Rami Levy on the seam between Arab and Jewish Jerusalem.

About one-third of the 50 planned stores were open for business on Tuesday morning, and Levi was sitting with a cappuccino at Cafe Neeman, a bakery chain that was doing a brisk business in the new mall.

“I’ve waited for this for many years,” said Levy, whose supermarket chain, Rami Levy Shivuk Hashikma Ltd., is behind this project. “I remember going to Ramallah with my father when I was 12, when we used to go there easily. And as the years went on and things got worse, I had a dream that we’d be able to do this, here.”

“Here” is Atarot, the location of one of the largest industrial parks in the Jerusalem area. It’s at the northern end of Jerusalem, where Palestinian and Jewish neighborhoods brush up against one another.

Officially, the mall will open for business on January 29, Levy said. For now, about one-third of the stores were open, while others were still stocking inventory. Some 35 percent of the store owners in the mall are Palestinian and some of the branches of chain stores are owned by Palestinian franchisees.

Customers, a mix of Palestinians and Israelis, were drinking coffee and eating pastries at Cafe Neeman, and wandering in and out of the stores that were open.

“I liked the idea of coexistence at the mall,” she said. “People will need to get used to it, of course. But why not?”

It’s the first time that a store like Golf has come to Beit Hanina, said Mansour.

“A lot of Arab customers come to us because they love Golf, and they’ve been waiting for this,” she said. “Our products are very well-liked by Arab customers.”

Fahmi Jbouh, owner of women’s clothing boutique Neeva, lives in Beit Hanina, and was stocking his new store with their inventory of women’s wear imported from Turkey. 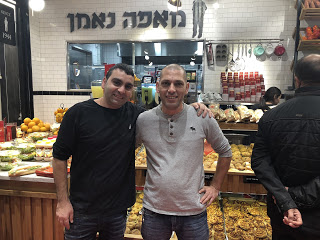 “It’s really my wife’s store,” he said. “We decided to open because there will be more business here. It’s a better location in a mall. We wanted to grow our business.”

The Cafe Neeman chain opened its 56th outlet in the mall, said Yaniv Neeman, scion of the family, who was working the sandwich counter on Tuesday morning. The manager is Amjad Awadalla, who franchised this branch.

“That’s how we always do things,” said Neeman. “Jews and Arabs always work together at every Cafe Neeman.”

Peaceful coexistence between Jews and Arabs. Isn’t that what everyone wants?

Fatah called on the Palestinian people to boycott the “colonial markets and shops of Rami Levy,” saying that “buying, renting or shopping is a betrayal of the homeland.”

In 2010, Fatah called on Palestinians to boycott Rami Levy supermarkets. It threatened anyone who shopped there and took photos of shoppers and license plates. Palestinians all ignored the threats and shop there all the time, side by side with Jews, and there are very few problems (sometimes terrorists will target the stores.)

Each month, hundreds of Palestinians visit the shopping centers owned by Israeli businessman Rami Levy in the settlements of Kfar Etzion in Hebron and Ma’alie Mikhmas near Ramallah, in search of the cheapest prices and offers.
Mother of five, Dalal al-Kuwaiti, told Al-Monitor in Ramallah, “The first time I went to shop from Rami Levy four years ago, it felt strange for me to be in an Israeli settlement mingling with settlers, but I got used to it.”
Kuwaiti shops at Rami Levy twice a month, spending 1,000 shekels [$280], or one-third of her husband’s salary, who is a PA employee. “I would need at least twice that amount if I were to shop at the local Palestinian market. There are always offers and sales on food items, which is unheard of in local markets.”
Despite the National Dignity Fund publishing censored photographs of car license plates and Palestinian shopper’s faces to deter them from shopping at Rami Levy, they continued to do so.