Batya Ungar Sargon, the editor of the Forward, tweeted a statement at Mondoweiss by Angela Davis about how the Birmingham Civil Rights Institute Board of Directors reversed their decision to award her the Fred Shuttlesworth Human Rights Award.

Her comment was “R Avraham Yehoshua Heschel is turning over in his grave. We Jews need to stop being the face of tearing down black people, or anyone person of color who supports Palestinians. This was NOT DONE IN MY NAME.”

The photo accompanying the Mondoweiss article, and posted by Ungar-Sargon, shows Angela Davis smiling next to convicted terrorist Rasmea Odeh.

Apparently, according to the current “woke” thinking, it is racist for a Jew to be outraged at a black person who fights tooth and nail to destroy the Jewish state and who embraces a murderer of Jews. It is not so bad if the person is white, though. 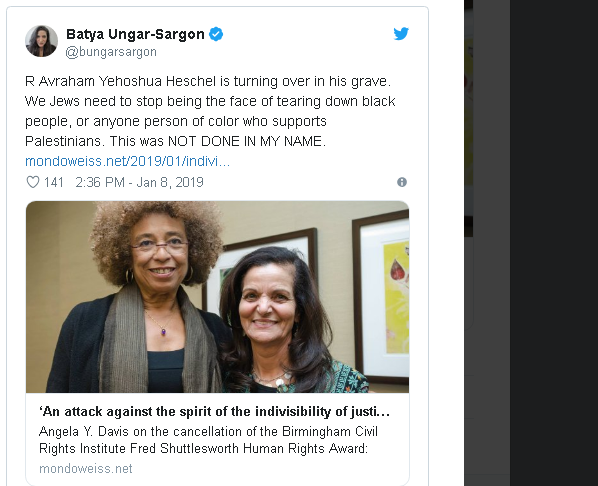 The original pushback for giving Davis the award came from an article in Southern Jewish Life which described in detail Davis’ antipathy towards Israel – including many positions that she takes that are categorically false:

Something not included in the Institute’s publicity for the event is that Davis has also been an outspoken voice in the boycott-Israel movement, and advocates extensively on college campuses for the isolation of the Jewish state, saying Israel engages in ethnic cleansing and is connected to police violence against African-Americans in the United States.

In her talks, the “building communities united” specifically excludes supporters of Israel as intersectional coalitions adopt the Palestinian struggle as their own.

Her 2015 book was entitled “Freedom Is a Constant Struggle: Ferguson, Palestine, and the Foundations of a Movement,” and she frequently compares Israel’s treatment of Palestinians to police shootings of African-Americans. She has also said Israel gets its tear gas to use against Palestinians from the same company that supplies the police force in Ferguson.

There is a national effort among advocates for the Palestinians to get police departments to refuse joint training with Israeli police on best practices for fighting terrorism and enhancing emergency response.

She also connects Israel with one of her primary causes, the abolition of the prison system in the U.S., which she calls the “prison-industrial complex.” Palestine under Israeli occupation is “the worst possible example of a carceral society” as the world’s “largest open air prison,” she has stated.

Davis compares Israel to apartheid South Africa, but has stated that Israel is worse in its treatment of Palestinians. She refers to the security barrier Israel erected following a long series of deadly suicide bombings by Palestinians in Israel in the early 2000s as an “apartheid wall.”

Davis has called for “political prisoner” Marwan Barghouti to be released from jail. A leader of the Al-Aqsa Martyrs Brigade, Barghouti is serving five life terms for participation in murders of Israelis. A leader of the First and Second Intifadas, in 2014 he called for an end to Palestinian security cooperation with Israel and advocated a Third Intifada.

Davis also was a supporter of Rasmea Odeh, who was convicted of a 1969 bombing in a Jerusalem grocery store, killing two students. A member of the Popular Front for the Liberation of Palestine, Odeh was deported from the U.S. for immigration fraud, lying about her terror ties and not disclosing her terrorism conviction.

At a sendoff party for Odeh in Chicago on Aug. 12, 2017, Davis praised her for decades of “her principled challenges to the policies and practices of the state of Israel,” saying Odeh was being deported to cover up governmental efforts to “blunt support for BDS.” She also said the deportation was the result of misogyny, an assault on immigrants, and xenophobia.

In her speech, Davis also said “we see the state of Israel as perpetrator of sexual violence and trauma, and we see the U.S. government reaping the benefits of that sexual attack as it has designated Rasmea a terrorist even as she has suffered under sexual terrorism.”

She referred to terrorism charges leveled against Odeh as “fabricated,” and done “in an attempt to dampen a growing movement for justice — justice for Palestinians, justice for people of African descent, for indigenous people, for Latino people.”

In a 2017 talk at George Washington University, Davis asserted “In standing up against the racism of the state of Israel, we are passionately saying no to anti-Semitism as well,” and opposing Israel benefits the Jewish people.

Ignoring Jewish indigenous ties to the land of Israel, she also reminded the audience that like Israel, the United States “is also a settler colonial nation” occupying someone else’s land.

She is a passionate supporter of the boycott-Israel movement, routinely joining Pink Floyd’s Roger Waters and author Alice Walker in pressuring entertainers who have scheduled events in Israel to cancel.

Davis co-signed a letter stating that restricting BDS to the settlements lets Israel “off the hook” for approving the settlements, Israeli banks for financing them, and other “serious violations of international law” by Israel.

She also endorses an academic boycott of Israeli institutions and professors.

Davis criticizes Israel for what is called “pinkwashing,” defined as Israel’s touting its acceptance of the LGBTQ community as a way to “distract” from other “crimes,” and falsely charging that Palestinians who are LGBTQ aren’t allowed into Israel.

In a January 2018 speech at Washington University, Davis stated that pro-Israel advocates can not stand for intersectional social justice, and all feminists should be pro-Palestine.

Batya sees through all of this and knows that the real reason Jews don’t support honoring someone who consistently slanders the Jewish state with provable lies  and supports convicted terrorists like Odeh and Marwan Barghouti is because we are a bunch of racists.

There is nothing consistent between supporting human rights and being against human rights of the Jewish people to live peacefully in a Jewish state.

And by the way, AJ Heschel was a supporter of Israel defending itself, saying “We have a right to demand, ‘Love they neighbor as thyself.’ We have no right to demand, ‘Love they neighbor and kill thyself.’ No moral teacher has ever asserted, ‘If one stands with a knife threatening to kill you, bare your heart for him to murder you.’ There is no moral justification for self-destruction.”

He also said this: “The land was taken from the Jewish people by violence, and we have never abandoned hope of regaining it. Throughout the ages we said No to all the conquerors of Palestine. We said No before God and man emphatically, daily. We objected to their occupations, we rejected their claims, we deepened our attachment, knowing that the occupation by the conquerors was a passing adventure, while our attachment to the land was an eternal link. The Jewish people has never ceased to assert its right, its title, to the land of Israel. This continuous, uninterrupted insistence, an intimate ingredient of Jewish consciousness, is at the core of Jewish history, a vital element of Jewish faith.”

Yes, Heschel knew that the Arabs are the occupiers and the Jews are the indigenous people of the Land. He opposed everything Angela Davis believes about Israel.

I guess if he would have said those words today to Angela Davis he would be considered a racist by Batya Ungar-Sargon as well.