Mrs. Elder took a picture of where we are staying in Jerusalem and posted it to her Facebook account. Facebook, pretending to be helpful, asked “Is this where you are?” and titled it “Jerusalem, Palestine.”

This blatant disrespect to thousands of years of Jewish history is, of course, outrageous and offensive.

But when she showed it to me and I looked at the map that Facebook showed, the landmarks didn’t sound Middle Eastern.

They were in Kuala Lumpur.

I zoomed out and saw exactly where Facebook thinks “Jerusalem, Palestine” is. 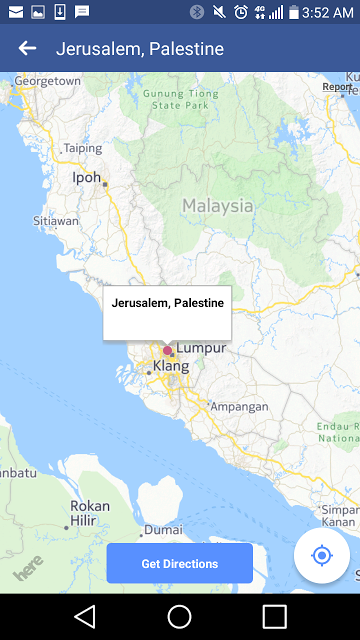 Rather than get angry at Facebook yet again, I think that Facebook has stumbled onto a solution to a major Middle East peace issue.
Since the Palestinians insist that Jerusalem must be part of their state or else they will continue to pursue violence instead of peace, we just have to award them the “Jerusalem, Palestine” in Malaysia.
Their historic ties to the Malaysian Jerusalem are just about as strong as their historic ties to Jewish Jerusalem, after all.