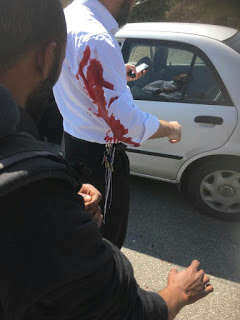 We’re hearing reports of an Arab-on-Israeli stabbing near the Tunnel Road security checkpoint around 11:15 this morning (Tuesday).

Israel National News says the victim is a man in his 40s, evidently an Israeli, and the alleged attacker is “reportedly an Arab resident of the Palestinian Authority“. Police are still investigating what happened at this hour. The victim of the attack is conscious with injuries “across his upper torso” that are said to be “light”. He was taken by ambulance to Shaarei Zedek Medical Center hospital for treatment.

A report with an accompanying photo on the Hebrew-language Rotter.net news site [see image at right] suggests the victim is a Haredi Orthodox Jew.

The Tunnel Road is part of a major north-south Israel highway, Route 60. At the point where the attack evidently occurred, it principally serves traffic passing between Jerusalem and the Gush Etzion communities south of the capital.