The future of Jewish culture and heritage in Iraq will be on the agenda at an international two-day conference in Israel on 20 and 21 May 2019*.  But for age-old synagogues, cemeteries and Jewish shrines, it may well be too late to save them.

Speaking to a reporter from Israel National News (click here for video),  Dr Zvi Yehuda of the Babylonian Jewry Heritage Center at Or Yehuda, which is hosting the conference jointly with Bar Ilan University, said that  2,600 years of Jewish heritage was being wiped out altogether.

Of 33 synagogues in Baghdad, only one remains. It is almost permanently shut. Although the new Jewish cemetery – the old one was destroyed under the Qasim regime in 1958 –  still exists in Baghdad, Dr Yehuda has received eye-witness reports that other cemeteries have been destroyed and built over. In one instance, a school was erected on Jewish graves. 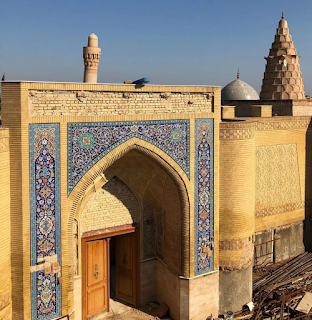 A huge mosque now envelops the Jewish shrine of Ezekiel

Concerning Jewish shrines, Dr Yehuda deplored what has happened to Ezekiel’s shrine, which was the most important of Jewish pilgrimage sites prior to the mass exodus of Jews from Iraq in 1950 -1. A huge Sh’ia mosque, built in 2016 -7, now encircles the burial chamber and adjoining synagogue of the Biblical prophet. 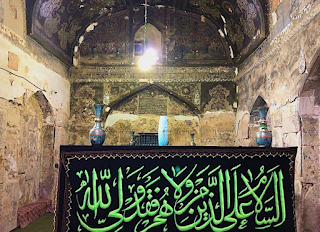 Ezekiel’s burial chamber with its Hebrew inscriptions on the walls is still intact, but the tomb is now said to be that of Ali, the founder of Shi’ism

This means that no Jew will be able to visit the shrine, as no Jew is allowed access through the mosque. Sh’ites consider  non-Muslim najas, or unclean. While for centuries Muslims attributed the shrine to the obscure Muslim prophet Dhu al-Kifl, the new Sh’i’a mosque has been rebranded as the burial place of Ali, Muhammad’s son-in-law and the founder of Sh’ism.

For 1,000 years the Jewish character of the shrine had been preserved.  Even Saddam Hussein had not dared to touch the shrine, Dr Yehuda said, and until recently the Iraqi authorities contemplated preserving the shrine in order to attract Jewish tourism. They feared international pressure**, especially from the US government. At a meeting with Unesco in Paris in 2014, Professor Shmuel Moreh had sounded warnings that the Iraqi Wakf (religious endowment) intended to build a mosque, but he was told not to meddle in the matter. The Wakf went ahead regardless. Professor Moreh died in 2017.

**Point of No Return’s petition to preserve the shrine drew over 1,000 signatures.