On Sunday, there was a fundraising event in Teaneck, NJ, to raise money for an ambulance for Israel’s Magen David Adom service.

A dozen people counter-protested, because, apparently, God forbid that Israelis have the ability to save people’s lives.

Here is how the counterprotest was reported in the North Jersey Record:

Across the street from Congregation Beth Sholom, where the event was held, protesters waved signs and chanted “Free Palestine.”

“I’m not opposed to ambulances, but you have to understand this ambulance is part of the larger picture of Israel,” said Rich Siegel, a Teaneck resident and co-director of Deir Yassin Remembered, which organized the protest. “Any time there is a pro-Israel event we need to be out here to support Palestine.”

The demonstrators were joined by a group of anti-Zionist Orthodox rabbis from the Neturei Karta movement. As the event went on, counter-protesters gathered nearby and the two groups began chanting back and forth.

Were the protesters “supporting Palestine” or protesting Israel? The signs they were waving, and the comment by Siegel, show the answer: 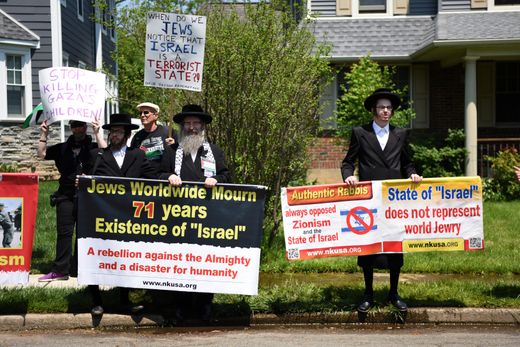 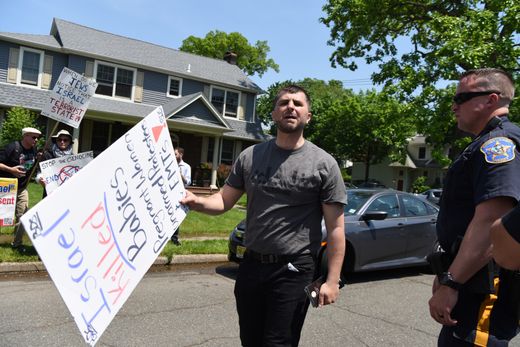 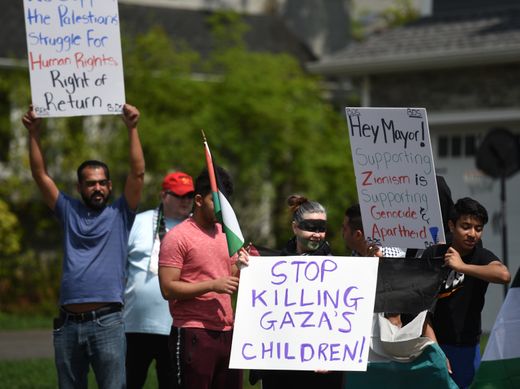 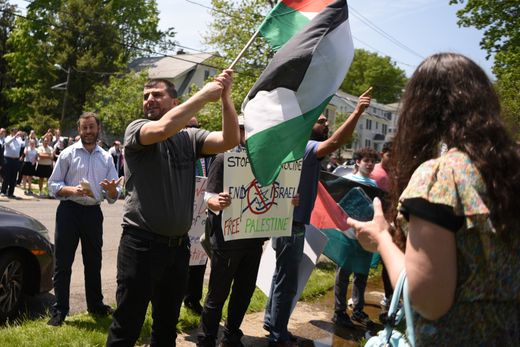 There is nothing “pro-Palestinian” in these protests. The one sign that says “free Palestine” says “End Israel” before that. In video, the only chant that one can hear from the purported “pro-Palestinian” protesters is “Baby killers”  – protesting a service that saves babies’ lives.

The caption for the photos, however, say “A group of pro-Palestinian supporters organized by ‘Deir Yassin Remembered’ protest outside of the event.”

This protest, tiny as it was, shows the truth: that there is no such thing as a “pro-Palestinian” movement. It is all anti-Israel. If Israel would disappear and be taken over by an Iranian proxy like Hezbollah, not one of these people would be in the streets chanting “Free Palestine,” just as no one was in the streets protesting Jordan’s annexation of the West Bank in 1949.

Again, they are not protesting Israel’s government policies nor are they saying they want Palestinian independence. They are protesting an Israeli ambulance response service that saves lives without asking the religion of those they help.

Teaneck’s Muslim mayor, who is far more pro-Israel than the pseudo-Jews protesting the ambulance service, was at the fundraiser:

Mayor Mohammed Hameeduddin said he saw firsthand the diversity and skill of Magen David Adom’s volunteers while visiting Israel in 2014.

Hameeduddin was dining in a restaurant when a man had a seizure. Within minutes, the ambulance service responded to help.

“The vans arrived and out came people of all different backgrounds, working together to save lives,” he said. “This organization gives us all hope for the future, hope for our children and hope for peace. That’s what we all want.”

If protesters were truly pro-Palestinian, they would support Magen David Adom, not protest it.