We are approaching the 30 November, the date to commemorate the exodus of Jews from Arab countries and Iran. Ashley Perry is one of the architects of the law designating Jewish Refugee Day. Writing in JNS News,  he understood that the more he pressed the issue, which by international, U.S. and Israeli law must be part of any resolution to the conflict, the more he realised that Jews in Israel and abroad are not even aware of it.

Growing up in a thriving Jewish community, attending a Jewish school, and being involved in the Jewish community and Zionist organizations, I am astounded now, thinking back, how little was taught about the long and illustrious history of the Jewish communities of the Middle East and North Africa, and their subsequent expulsion.

How many are taught about the Jewish communities of Algeria, Egypt, Syria and Yemen—to name but a few of many nations now completely without a Jewish presence?

While in government, we often raised this issue on the international stage and at the foreign ministry under the leadership of then-Foreign Minister Avigdor Lieberman and even initiated a now annual event at the United Nations solely devoted to the issue of the Jewish refugees from Arab countries with our partners in the World Jewish Congress and the Conference of Presidents of Major American Jewish Organizations. 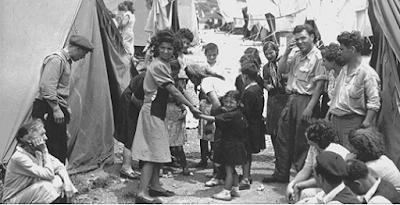 However, the more we pressed the issue, which by international, U.S. and Israeli law must be part of any resolution to our conflict, the more I understood that Jews in Israel and abroad are not even aware of it.

Dr. Ohayon created for the first time ever a Knesset caucus for Jewish refugees from Arab countries, and although the meetings were well-attended and frequent, the attendees were mostly the survivors of pogroms in the Arab world and the expellees themselves, and few from the following generations.

To spread greater understanding of the issue abroad, with the Ministry of Foreign Affairs Bureau for World Jewish Affairs and World Religions, headed by Akiva Tor, we created a traveling exhibition that would be sent to embassies, consulates, Jewish communities and organizations around the world to print out locally and display at relevant events surrounding the date. (The exhibition is still available for anyone who wants to receive the PDF slides.)

Every year, more events are held around the world, organized with the assistance of Israel’s embassies and consulates, and the local Jewish communities. But it is still not enough. We can still see that the history of the Jews from the Middle East and North Africa is not even close to the global Jewish agenda.

Before we ask the world to recognize and address their moral, legal and historic rights, we should inform ourselves about the history of the communities, as well as their cleansing and extinction during the 20th century.

For many around the world, Jewish history and culture is largely defined by the Jews of Eastern and Central Europe. Still, the Jewish communities of the Middle East and North Africa bestowed great scholarship, cultural and economic successes on many occasions without parallel anywhere in the world.

It is an uphill battle and one our opponents do not want to become widely known because it flips on its head all standard notions about the conflict, including conquest, oppression and indigeneity. I know of an academic who tried to hold a purely historical conference on the history of the Jews of the Middle East and North Africa, and was turned away by dozens of American universities, even Jewish-studies departments, because the subject matter was considered “too controversial.”