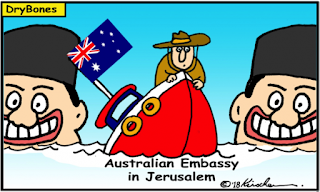 Forget about Australia moving its Embassy from Tel Aviv to Jerusalem.

Indonesian threats to not sign a free trade agreement with Australia – coupled with veiled Malaysian suggestions of terrorist attacks on Australian targets if the Embassy is moved – will suffice to burst Prime Minister Scott Morrison’s thought-bubble.

Australia gave Indonesia $360 million in aid in 2016 and was the world’s 16thlargest donor in giving $15 million to the United Nations Relief and Works Agency for Palestine Refugees (UNRWA). Indonesia gave UNRWA $5000.

Malaysia gave nothing to UNRWA in 2016.

Read on for artiForget about Australia moving its Embassy from Tel Aviv to Jerusalem.Indonesian threats to not sign a free trade agreement with Australia – coupled with veiled Malaysian suggestions of terrorist attacks on Australian targets if the Embassy is moved – will suffice to burst Prime Minister Scott Morrison’s thought-bubbleAustralia gave Indonesia $360 million in aid in 2016 and was the world’s 16thlargest donor in giving $15 million to the United Nations Relief and Works Agency for Palestine Refugees (UNRWA). Indonesia gave UNRWA $5000.

Indonesia and Malaysia – two Islamic states – flex their muscles on Islamic claims to Jerusalem – yet do not financially support their Islamic brethren.
Morrison first flagged the Embassy move on 16 October at a joint press conference with Foreign Affairs Minister Marise Payne:


“Now, in relation to our diplomatic presence in Israel. What I have simply said is this – we’re committed to a two-state solution. Australia’s position on this issue has to date assumed that it is not possible to consider the question of the recognition of Israel’s capital in Jerusalem and that be consistent with pursuing a two-state solution.
Now, Dave Sharma, who was the Ambassador to Israel, has proposed some months ago a way forward that challenges that thinking and it says that you can achieve both and indeed by pursuing both, you are actually aiding the cause for a two-state solution. Now, when people say sensible things, I think it is important to listen to them”

Australia’s commitment to the two-state solution– the creation of a second Arab state – in addition to Jordan – in the territory that comprised the 1922 Mandate for Palestine –  is based on:

Intensive negotiations between Israel and the Palestine Liberation Organisation spanning the last 25 years have failed to achieve this two-state solution– being unable to agree on whether the new State should:

Australia is not alone in clinging to this outdated two-state solution. Countless UN Resolutions calling for this two-state solution continue to consume reams of paper and dominate meetings of UN committees, the General Assembly and Security Council – rather than considering alternative solutions to ending the Jewish-Arab conflict.

Morrison probably did not realise how close he was to committing Australia to a very different two-state solution when he told the press conference:


“The whole point of a two-state solution is two nations recognised living side by side. And so, opening up that discussion does provide us with the opportunity, I think, to do what Australians have always done and that is to apply a practical and common-sense and innovative role in trying to work with partners around the world to aid our broader objectives, in this case a two-state solution.”

That alternative two-state solution involves Jordan and Israel – the two successor states to the Mandate for Palestine – currently exercising sovereignty in 95% of the territory comprised in the Mandate – negotiating the allocation of sovereignty in the last remaining 5% between their two respective States.

This solution was first suggested by the League of Nations in 1922: one Jewish State and one Arab state living side by side in former Palestine in peace with each other. Redrawing the international border between Jordan and Israel in direct negotiations would complete this two-state solution.
Moving Australia’s Embassy to Jerusalem would be a no-brainer under the 1922 two-state solution.