From an EU press release:

Each year, 10th of December marks the day, when the Universal Declaration of Human Rights was adopted with a view to express a universal commitment towards the respect and protection of human rights for all individuals without discrimination. This year, UDHR turns 71 and we also celebrate the 30th anniversary of the UN Convention on the Rights of the Child.

Yet fundamental human rights continue to be challenged around the world, including in the occupied Palestinian territory. Palestinian children in particular face significant obstacles in accessing basic services and enjoying their fundamental human rights. Some of the obstacles are developmental in nature and at times linked to cultural and religious issues as, for example, the case with child marriage or gender based violence. However, the major factor that impedes the full realisation of children’s rights in the oPt is the decades-long Israeli occupation, including the Gaza blockade. It is clear that children are disproportionately affected by the conflict and occupation. An unacceptable number of Palestinian child casualties have been attributed to Israeli forces and many Palestinian children are held in detention by Israeli forces over security offences. Moreover, restrictions on the freedom of movement severely impact on Palestinian children’s enjoyment of their fundamental human rights, including the right to education and the right to health.

According to the EU, Palestinian youth face some relatively minor human rights challenges from cultural or religious factors,  but the real problem is Israel.

Not a single word about how the Palestinian political leadership abuses children as policy.

The official Fatah Facebook page published this video only last month of a girl reciting a poem glorifying children killing themselves for “martyrdom.”

“His mother promised him a gift if he finished his food. The boy wondered in excitement: ‘Is it a toy?’ His mother approached him with a glowing look while carrying the gift. He looked, and it was a rifle! He shouted loudly: ‘O Mommy! Mommy! What is this? Is this the gift?’ She picked him up, hugged him, and said: ‘My son, we were not created for happiness. In my eyes, you are meant for Martyrdom!’ … Jerusalem is ours, our weapon is our Islam, and our ammunition is our children. And you, O my son, are meant for Martyrdom. [The boy] returned to his bed and complained to his pillow, for he is too young for these things… He gave in to his dreams. He sees his bride (i.e., Jerusalem), but she is handcuffed, and the Jews surround her, and she says to him: ‘O my knight, release me from the handcuffs… I, Jerusalem, say this to you: What was taken by force will only be returned by force.’

A Bethlehem high school now has a plaque honoring a 17 year old suicide bomber at its entrance. It has an exhibition honoring other Palestinian terrorists. 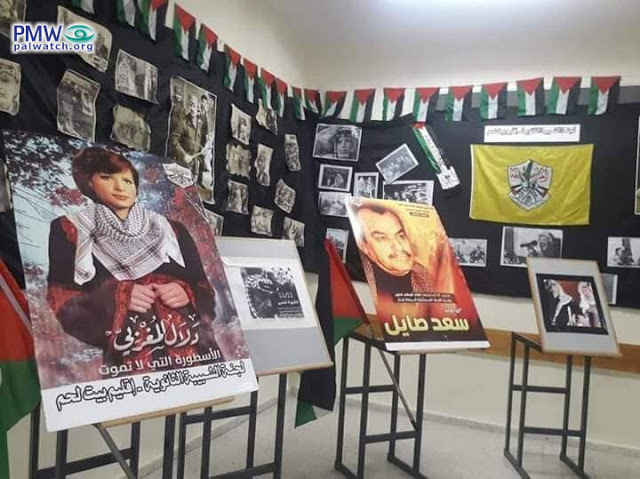 These aren’t anomalies. The entire Palestinian culture promotes dying for the honor of killing Jews directly to children.

And it is not only Fatah. UNRWA schools, funded largely by Europe, teach the exact same message to their students.

The same EU-funded PA just last month closed schools in order to increase the number of students participating in a “day of rage.” Not a day of tolerance and human right – just rage against Jews and Israel.

Beyond that we have para-military summer camps by Hamas and Islamic Jihad that teach children how to use weapons. There is literally a formal program to recruit children to jihad.

It is astounding that the EU cannot say a word about this, and instead uses Human Rights Day as an excuse not to help Palestinian youth but to bash Israel – the target of the directed hate – in the name of human rights.