Transparency International has released a report on corruption in Middle East and North Africa countries, and the Palestinian Authority is regarded as one of the most corrupt in the region.

The most shocking result is in the area of government institutions demanding sexual favors from women in exchange for services.

When it comes to measuring the impact of corruption on women in Palestine, gathering concrete evidence can sometimes prove difficult.

Although GCB results show that 21 per cent of people in Palestine experience sextortion or know someone who has, these incidents often go unreported.

This may be due to a tendency of victim blaming within Palestinian communities, where sexuality is still taboo.

As a result, many women often think twice before reporting sextortion.

According to the Coalition for Accountability and Integrity (AMAN), Transparency International’s chapter in Palestine, every year a number of women contact the organisation’s Advocacy and Legal Advice Centre with complaints of sextortion in public workplaces. In such cases, public officials abuse their authority to gain sexual favours from their employees. However, when asked to file a formal complaint outlining these incidents, most women refuse.

Civil society organisations in Palestine have advocated for the inclusion of sextortion as an illegal form of corruption. However, there is still no cohesive, consistent legal framework to criminalise sextortion as well as sexual harassment within the public sector. Similarly, the legal framework does not recognise and address specific forms of corruption experienced by women.


In Palestine, nearly one in two citizens thinks that most or all members of parliament
are involved in corruption. 51 per cent of citizens have little or no trust in the government. 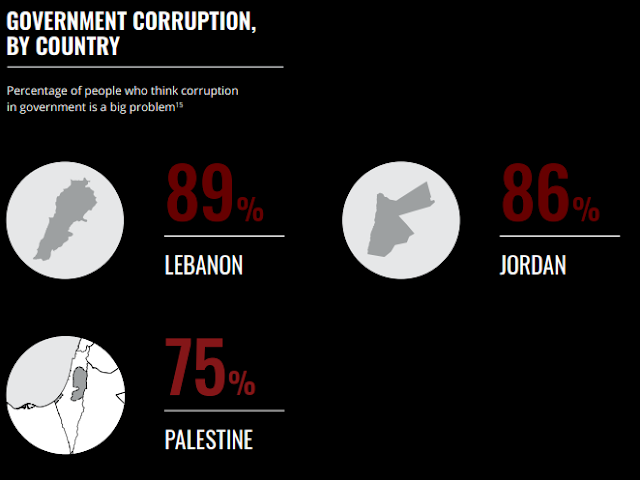 17% of Palestinians paid a bribe to receive a service in the past year.

Here is a summary of the results: 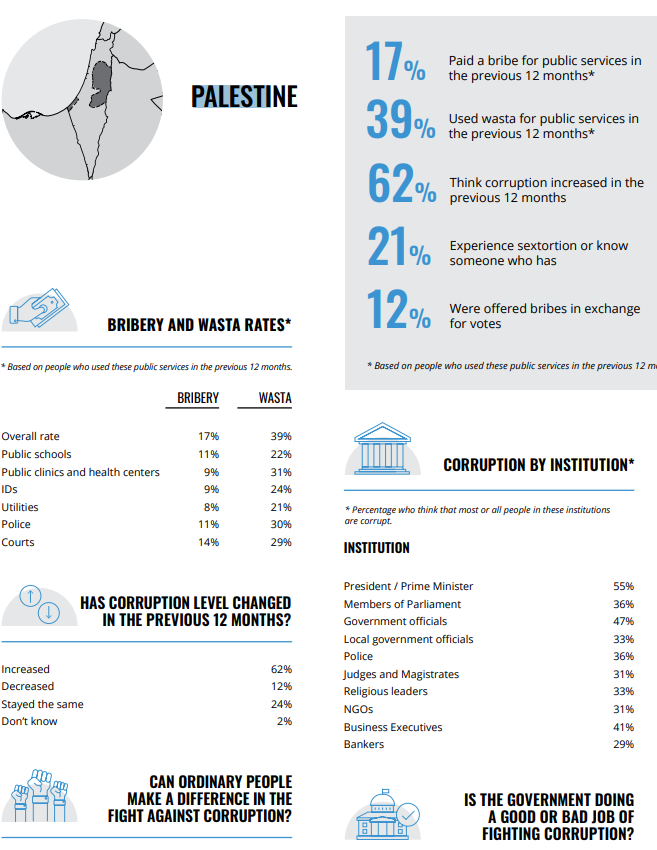 The difference between the Palestinian Authority and the other governments in the study is that such a high percentage of the PA budget is paid by European governments and agencies – money that is supposedly to promote good governance.

Perhaps that is part of the problem.