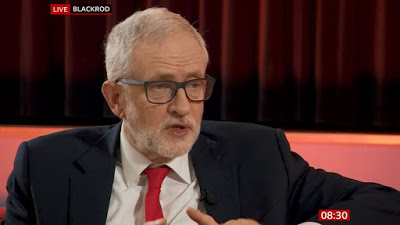 Almost everyone who is commenting on whether Jeremy Corbyn is an antisemite is missing the obvious point. Forget about whether the man apologized. When confronted with the most vile and violent forms of antisemitism, what has the man ever done?
Corbyn refuses to tell his partisans to cease and desist in their attacks upon British Jewish community.
Now, the man is not stupid. He hears what his backers are saying. For years, he has heard the constant attacks on Jews in social media and the insane antisemitic conspiracy theories that inhabit the leftist fringe. For years, he has read rabid rants against Jews in “pro-Palestine” forums in which he has participated. For years, he has listened to speeches by his “fri ends” – themselves actual terrorist leaders – at funerals and in meetings. For years, he has witnessed antisemitic propaganda in demonstrations and in the media. He cannot possibly claim ignorance of all of this. And yet, Corbyn has not once, not ever made a public request that his partisans or fellow leftists treat Jews with decency or respect. Not once, not ever has he corrected or objected to the most extreme conspiracy theory about Jews, or even against Holocaust denial. Not once, not ever has Corbyn expressed any honest empathy for an abused and embattled Jewish community.
Not once. Not ever.
Now Corbyn is in an election campaign in which antisemitism actually matters to some swing voters, to members of his own party, and to a visible Jewish minority in his country. Now he is faced with a rising tide of increasingly open antisemitic sleaze by his own people, and with a situation in which female Jewish MPs of his own party feel afraid enough to require security at his own party conference. Now he sees his own partisans slandering a rather mild-mannered Chief Rabbi and heaping abuse on the Jewish Labour Movement, one of the party’s oldest backers. Corbyn’s close allies, confidantes and subordinates constantly spin absurd and vicious lies about Jews that regularly appall people on the left as well as people on the right. He wrote a forward for an openly antisemitic book, worked for a disgustingly antisemitic TV network run by a foreign dictatorship and invited the most violently antisemitic terrorist groups in the world to the British parliament. He watched as the Jewish community, increasingly infuriated by all of this, progressively deserted the Labour Party and as almost the entire community became convinced that he, personally, is an antisemite. He cannot possibly claim ignorance of all of this.
Corbyn also watched impassively as – right before his eyes, at the very news conference announcing the Chakrabarti whitewash – a Momentum activist slandered MP Ruth Smeeth to the extent that she fled in tears.
Faced with this antisemitic torrent, Corbyn has said absolutely nothing and done absolutely nothing.
Not once. Not ever.
No, I’m sorry, can I take that back? Faced with this antisemitic torrent, Jeremy has done one thing. He has aggressively protected the most vicious of the antisemites. He has used lawyers to attack whistleblowers; he has used his close allies to defame Jewish leaders; his office has repeatedly interfered in internal investigations; he has bribed an official with a peerage to create a whitewashed report; he has repeatedly appointed antisemites to important positions. At the same time, he has disdain fully avoided talking with the mainstream Jewish community.
In short, Corbyn has gone to an enormous amount of trouble to avoid resolving the antisemitism problem in Labour. He has gone to an absurd amount of trouble to avoid making any kind of peace at all with Jews who have spent decades working for Labour and who wanted very much for Labour to succeed. He has gone to an incredible amount of trouble to avoid being the man his supporters claim him to be (“opponent of all antisemitism and racism,” etc.)
Any sane UK leader who was not deeply antisemitic would have been appalled by the flood of antisemitic abuse that he personally witnessed. Any sane UK leader who was not deeply antisemitic would have asked that his own people treat Jews with decency and stop savaging Jewish people. By sincerely requesting that his own backers to treat UK Jews with decency , he would have inoculated himself against charges of antisemitism and would have changed both the conversation and the actual situation.
But Corbyn has no objection when Jews are ridiculed by the left. He has no objection when Jews are demonized. He has no objection when Jews are physically attacked. He has no objection when his “friends” murder Jews in cold blood.
It doesn’t matter whether Jeremy Corbyn claims to be sorry or not, because he doesn’t act as though he considers Jews worthy of compassion or human rights. He acts as though he hates Jews. And he has created a party that is institutionally soaked in antisemitism, and which is the most powerful locus for antisemitism in the UK.
Jeremy Corbyn is an antisemite. If the shoe fits, wear it.