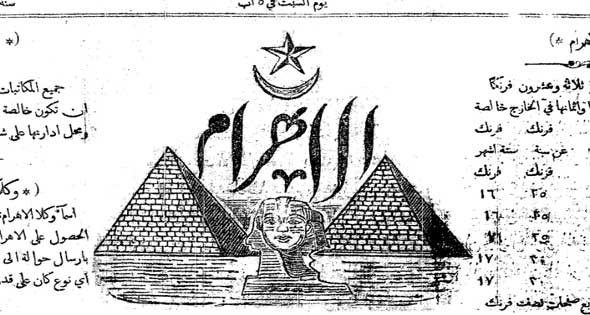 Here a case where the meta-story is more interesting than the story itself.

Israel’s foreign ministry announced last week that the National Library of Israel has launched a digital archive of Egypt’s  Al-Ahram newspaper dating back to its beginnings in 1875.
Egyptian journalists are upset. They denounced the move as Israel stealing Egyptian heritage.
This is a digital archive, not the actual physical paper.
“This is a catastrophic incident that requires an immediate inquiry on the parts of Al-Ahram and the authorities in charge of the press in Egypt,” Khaled El-Balshy, a former member of the journalists’ syndicate board, told The New Arab.
“The looming questions now are: how they did acquire the archive or how did they buy it? Who can give away valuable content like this to Israel?” he asked. “Other than normalisation, the idea is about intellectual property rights.”
The answer is on the archive page itself.
Apparently, an American company named East View Information Services purchased rights to the newspaper archives eight years ago for $185,000. They work together with Stanford University Libraries  and the Hoover Institution to digitize historic foreign newspapers.
Israel seems to have purchased the rights to Al Ahram, although the rights only extend to use within Israel.
The thing is, Al Ahram doesn’t make its own archive available to Egyptians!
Instead of being angry with their own leaders for not making material available, Egyptian journalists are upset with Israel for legally acquiring the digital rights – and calling it theft.
Sounds vaguely familiar.
Israel’s National Library has the full text of over 100 Arabic language newspapers – some of them Jewish, many of them Palestinian, but also from all over. I imagine many Arab researchers use the Israeli site for their own uses, as these archives are easily available and searchable.
The real story here are about how information is still not free in the Arab world even today.
The real story is about how Egyptian journalists still blame Israel for doing something that is perfectly normal and legal, and calling it theft.
The real story is how Arab nations still try to control all information, and how this impedes national progress.
The real story is how anger that should properly be directed at Arab leaders is instead redirected to Israel – because the Jews have been the scapegoats for everything that the Arab elite don’t like rather than looking at their own shortcomings.