Hard-hitting piece in Israel Hayom by Bar Ilan research fellow Dr Edy Cohen about the Nazi roots of the Farhud, whose 75th anniversary falls this week. Dr Cohen suggests a cover-up, where Israel ‘paid senior academics’ to determine that the Farhud was an ‘Arab ‘ incident. My view is that, whether Arab or Nazi, Israel ignored the Farhud pogrom due to its Eurocentric establishment and education system – just as it ignored the fact that Libyan Jews died in concentration camps during WW2. (with thanks: Imre) 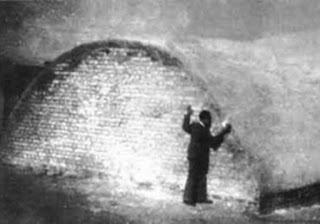 Mass grave of the Farhud victims in the old Jewish cemetery, Baghdad

June 1, 1941, on the holiday of Shavuot, the Farhud took place in Iraq — a pogrom against the Jews carried out be an incited, raging Muslim majority that was the result of the Third Reich’s Nazi propaganda. Hundreds of Jews were murdered in Baghdad and elsewhere, and thousands more were injured. Jewish property was looted, and many homes were burned down.

The Iraqi government established an investigation committee to look into the riots, and the findings revealed that Jerusalem Grand Mufti Haj Amin al-Husseini and the Nazi Arabic-language propaganda broadcast on the radio from Berlin were the main causes behind the massacre. The mufti’s followers were the ones who carried out the pogrom due to the failure of the coup he helped to orchestrate after fleeing Palestine.

That is why the frustrated mufti decided to settle the score with Iraq’s Jews. In his memoirs, he even justified the Farhud, writing, “The Fifth Column had a great influence on the failure of the Iraqi movement, and was comprised of many elements, most importantly, the Jews of Iraq. During the fighting, [Lebanese diplomat] George Antonius told me that Jews employed in the telephone department were recording important and official telephone conversations and passing them to the British embassy in Baghdad.

Jewish workers in the post and telegram departments acted in a similar fashion, forwarding the messages and letters they received to the embassy.” Later,when the survivors of the Farhud immigrated to Israel, Israeli authorities flatly refused to recognize them as victims of Nazism. Even today, anyone who tries to expose the injustice done to Jews from Arab lands is blamed for attempting to provoke ethnic clashes. And so, for many years, they managed to silence anyone who attempted to bring the issue to light, and the culture, leaders, authors, poets and spiritual life of Jews from Arab countries were not integrated into the school curriculum (in contrast to the history of European Jews). In this context, one must also recall the Yemenite Children Affair (in which hundreds of Yemenite babies were kidnapped upon their families’ arrival in Israel and given to Ashkenazi families), which is a part of history that is still mainly untold and unknown.

The Farhud is inseparable from the Nazi atrocities. It was carried out by Arabs who were directly incited by Joseph Goebbels’ Nazi propaganda — according to Iraq’s own investigation. Despite this, Israel “cleansed” the Nazis of these crimes over a period of several years. A lot of money was invested and paid to senior academics to determine that the Farhud was an “Arab” incident.

Throughout history, there is no incident similar to the Farhud, which was carried out to harm Jews in an Arab state. There is no doubt that the Nazi propaganda is what incited and caused the murder of Jews. Today, 75 years later, the situation is beginning to change — justice has finally won, if a bit late. Finance Minister Moshe Kahlon made the administrative decision to end the injustice, stating that anyone born in Iraq up until the Farhud would be eligible to receive an annual grant, among other benefits.

Additionally, thousands of Jews of Iraqi heritage have been fighting for compensation for years, with the help of attorney David Yadid, in a suit that is awaiting a ruling shortly. The benefits and efforts to correct the injustice done to Jews from Arab countries will not be determined solely by the court’s ruling. Education Minister Naftali Bennett has established a committee led by poet and Israel Prize laureate Erez Biton, to review efforts for the further integration of content about the Jewish communities from Arab countries into the curriculum, out of a desire to expose Israeli students of all ages to the cultural, social and historical wealth of these communities.

We must remember that Jews from Arab countries and their descendants are not a minority, rather, they now make up more than 50% of Israel’s Jewish population.