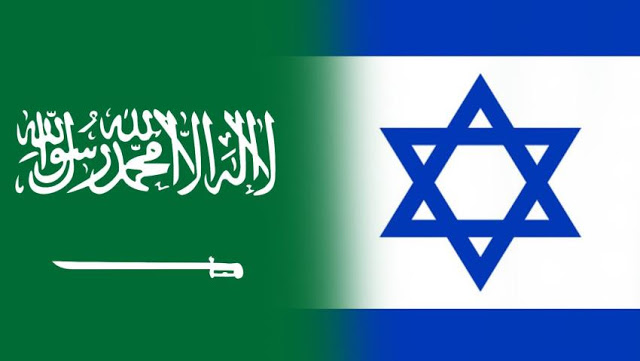 Barak Ravid has a phenomenal scoop, published in Axios:

On the last day of the 2014 Gaza War, Prime Minister Benjamin Netanyahu held a secret meeting with a special envoy from the Saudi king. In the meeting, Saudi Arabia proposed a joint diplomatic initiative on re-launching Israeli-Palestinian peace talks, rebuilding Gaza and confronting Iran, three sources briefed on the effort told me.

Why it matters: This was an unprecedented move by the Saudis — who do not have diplomatic relations with Israel — that could have profoundly shifted the regional dynamic. More surprisingly still, the Saudis planned to present it in public with the Israelis.

The details of the Saudi proposal, according to the sources:

The backstory, according to the three sources:

In early September 2014, Netanyahu held a secret meeting with Saudi national security adviser, Prince Bandar Bin Sultan. The meeting took place in a third country.
Bandar told Netanyahu at the meeting that Saudi Arabia wanted to re-launch the peace process in order to be able to unite the region against Iran.
Netanyahu was enthusiastic, and after 10 hours of talks he and Prince Bandar agreed to start preparing for a summit at the UN.
In the next few weeks, meetings were held between Netanyahu’s advisers and Bandar’s aides to draft a joint document.
Israel presented a draft, and while the Saudis agreed to many of the points, they asked Israel to show flexibility. Netanyahu refused to go further and the talks collapsed, the sources told me.

Between the lines: The sources told me the Saudis felt they went out of their way towards Israel. They said the Saudis felt angry and humiliated, and held Netanyahu responsible.

The sources told me that Prince Bandar conveyed a message to Netanyahu two months later, with the bottom line being that he believed Netanyahu lied to him.

The big picture: The affair created a deep crisis between Israel and Saudi Arabia and communications between the parties almost stopped — even on the Iranian issue. The crisis ended only a year later, several months after the death of King Abdullah and the inauguration of King Salman.

Notice that Ravid is doing everything he can to make Netanyahu look like the bad guy here. His headline is “Israel rejected 2014 Saudi proposal on Palestinian peace talks.” All Israeli media followed that headline, saying it was Netanyahu who rejected a Saudi peace proposal.

But the story shows that it was Israel that presented a detailed plan, and the Saudis are the ones who rejected it.

Without knowing the details we can’t know whether it was Netanyahu’s red lines or the Saudi red lines that are unreasonable, but the plain reading of the story is that the only rejection was from the Saudis.

The other thing this story – which provides no details on the plan itself – proves is that, unlike how he is portrayed in the media and by Israel haters or  so-called “moderates” like J-Street, Netanyahu was enthusiastic to come up with a peace plan with Saudi Arabia, speaking to their foreign minister for ten hours about it. This is completely opposite to how Netanyahu is treated in the media, even in this article itself.

One is reminded of the other peace proposal that no one wants to talk about, from 2013 and 2014, that the US drafted, Israel accepted and Palestinians rejected. It is never listed as one of the failed peace initiatives that Palestinians rejected, unlike the ones from Israel’s non-Likud prime ministers.

If it doesn’t fit with the meme of Bibi being a right-wing warmonger, the story must not be told – or, like here,  it must be spun to fit the meme.

This has consequences. The truth is that Israel is the party that wants real peace, and the rejectionists are always the Arabs. The refusal of the media to give Bibi any credit for wanting peace is a factor in the pressure Israel gets to always concede more, give more, compromise more – and the Arabs get a free pass.

In other words, if the media would treat Bibi with the deference they treat the late Yitzchak Rabin – who not once said that he supported a Palestinian state – then there would be a much greater chance of peace.