The way that so many people continue to defend Ilhan Omar is stunningly hypocritical.

The most-often seen defense is that Omar wants to simply open up a conversation about how money can corrupt politics, and that there is nothing antisemitic about bringing it up.

Typical is a tweet from Omar’s fellow member of Congress Alexandria Ocasio-Cortez where she says “I’m proud @IlhanMN raised the issue of lobbyist 💰 in politics & equally proud of her sensitivity to communities. Both are possible.”

But lobbyist dollars are equally given out on the Left and the Right. Ocasio-Cortez accepted money from many left-wing PACs. Omar received some $60,000 from PACs, including from the Council of American Islamic Relations.

Singling out AIPAC – which isn’t even a PAC! – when every single member of Congress receives PAC money is hypocritical.

But this is far worse.

The word “AIPAC” is a dog whistle for the “Jewish lobby.” In left-wing and Muslim circles, it means Jewish control of Congress and of the US government.

Looking the actual numbers shows what a lie this is.

In terms of lobbying causes to Congress, the pro-Israel lobby comes in at number 50, with $15 million spent in 2018, a tiny percentage of what the top lobby spent – $400 million from the securities and investment industry.

(UPDATE): Even that number is deceptive, because for the purposes of these statistics, J-Street is considered part of the “pro-Israel” lobby – and their policies are against what the Israeli government wants in virtually every case. J-Street account for half of the “pro-Israel lobby” dollars listed!

Even if for some reason you believe that money to lobby for other countries is more insidious than the billions spent scores of domestic lobbies with their own agendas, the Israel lobby is still not the largest.

Those would be South Korea and Japan, whose foreign lobbies spent many millions more than Israeli lobbies registered under FARA. 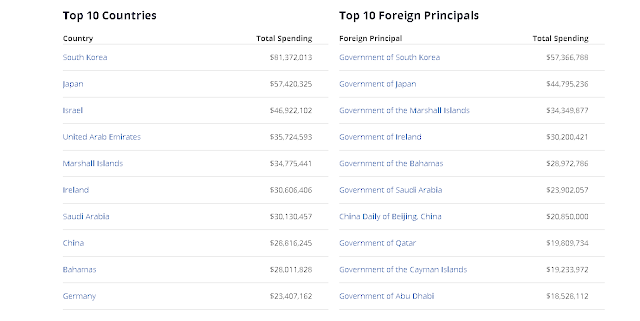 AIPAC is influential, no doubt. However, the emphasis on AIPAC plays on antisemitic stereotypes of Jewish money, Jewish influence and a Jewish agenda that is at odds with what is best for America.

It doesn’t get more antisemitic than that.

The people who are trying to excuse Omar as somehow ignorant of this, as well as those who are pretending that she somehow is only exposing the general influence of money in politics, are being disingenuous. The Israel lobby is not at or near the top of any metric in spending or influence among all the lobbies in Washington.

Choosing to only highlight AIPAC as the source of all Washington corruption is antisemitic. Ignoring that this is what Omar did, or pretending that she understands this now when she tries to pretend that she just randomly chose AIPAC as her example, is enabling and excusing antisemitism.