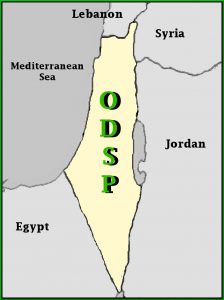 The Free Palestine Movement was behind the 2011 flotilla to Israel and styles itself as a progressive peace movement that is pro-Palestinian.

They said in a November newsletter that they will offer new members of Congress a trip to “Palestine” as a rebuttal to the AIPAC-sponsored trip most take, and it is possible that Rashida Tlaib, who announced in December that she wants to partner with pro-Palestinian groups on a similar trip, may be working with FPM on this initiative.

FPM just sent out an email urging members to visit and support a “Call for a Palestine Liberation Movement” webpage, that describes what they want to see as a solution to the Israel/Palestinian conflict.

Their solution, as the map here show – no Israel. It would be replaced with the “One Democratic State of Palestine.”

The description of that state makes it pretty clear that most Jews would be forced to leave.

This can only be achieved by establishing One Democratic State of Palestine for its indigenous people, the refugees who we were forced out of the country and its current citizens. This is the key to a ‘fair and permanent solution of conflict’ in the region, and to a ‘just solution’ for the Palestinian cause. Failing this, war and mutual destruction will continue.

They say they have no problems with Jews, which means they would allow any Jews who were there in 1917 or 1880 or something like that to stay, but anyone else who arrived after the Zionist movement began would not be welcome.

In other words – ethnic cleansing of Jews.

Someone may want to ask Tlaib if she supports the goals of the Free Palestine Movement and the Palestine Liberation Movement, and if her vision of a one-state solution looks like this one.

As of this writing, only eight people signed up for this vision, but it is in fact very close to what Palestinian Arabs say they want their own final solution to be, and “two states” are just a stage in the way to a single Palestinian state where Jews are only tolerated as a tiny minority with no political rights.