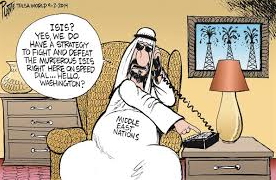 Russian UN Ambassador Vitaly Churkin’s assumption of the Presidency of the United Nations Security Council for October could have a lightning rod effect on the Security Council finally authorising military action against Islamic State and Al Nusra under article 42 of the UN Charter.

Both terrorist organisations have been the subject of many unanimous Security Council resolutions declaring them to be a threat to world peace and security – but all such resolutions have stopped short of authorising military action.

American-Russian relations are in a precarious and highly volatile situation today due to:


* the collapse of the ceasefire in Syria negotiated between America and Russia,

* America and Russia engaging in a vitriolic diplomatic war shaming each other for the humanitarian disaster in Aleppo as Russian-backed Government forces and American-backed rebel forces battle for supremacy at horrendous cost to the civilian population caught in the crossfire. 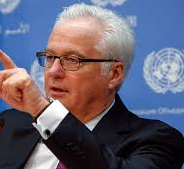 Churkin [pictured] has been afforded a world stage to justify Russia’s actions in Syria during regular media conferences that will be held by him as President of the Security Council. Churkin was quick to grab that opportunity on 4 October – as this official UN record reveals:


“He (Churkin) was not aware of plans for further discussions between United States Secretary of State John Kerry and Russian Federation Minister for Foreign Affairs Sergey Lavrov, and did not know the result of discussions between the two countries during the last few hours. The nature of their differences was overdramatized. He hoped cooperation on Syria could be resumed.

He could not accept unilateral steps such as grounding of airplanes.

Al-Nusrah had moved to Aleppo and was keeping the civilian population hostage. He wanted as close cooperation with the United States as possible in fighting Al-Nusrah. Had it not been for Russian involvement, [Islamic State] black flags could now be flying over Damascus. There were 3,500 fighters in eastern Aleppo, of which 2,000 were Al-Nusrah, based on Russian intelligence. The rest were scattered in different groups. ISIL was not there.”

White House spokesman Josh Earnest reportedly said US policy would continue to give priority to the fight against jihadi groups in Syria.


“With regard to US options, we obviously have been very focused on countering ISIL [Isis] and other extremist groups that are using the chaos in Syria as a safe haven to plot and carry out attacks”

Both Russia and America have previously expressed their willingness to involve the Security Council in defeating Islamic State and al-Nusra. Russian Foreign Minister Sergei Lavrov made this clear on 18 November last:


“The Security Council needs to give preferential attention to the task of creating a solid legal foundation for the fight against this evil [Islamic State] and for the mobilization of an actual global coalition in response to this common uncompromising challenge for us all.”


“And I respect those who are concerned about setting precedents of action outside of a U.N. Security Council resolution. I would greatly prefer working through multilateral channels and through the United Nations to get this done.”

Given the commonality of the positions of both America and Russia as reflected above – the possibility looms large that during Russia’s October presidency of the Security Council – Russia and America could co-sponsor a draft resolution to the Security Council authorising military action against Islamic State and al-Nusra.

October could indeed be make or break month for Syria.