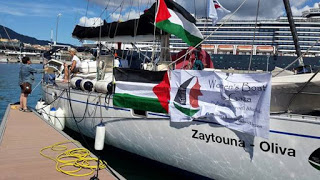 A group of women will try to reach the Gaza Strip on board a boat on Wednesday in a bid to break a decade-long blockade by Israel, a spokeswoman said.

Gaza has been under an Israeli blockade since 2006 but it was tightened in 2007 after the Islamist Palestinian group Hamas seized control in the tiny enclave.

Israel says its maritime, land and sea blockade of Gaza is aimed at preventing Hamas from receiving supplies which could be used for military purposes.

Fifteen women will try to breach the blockade aboard the Zaytouna-Oliva boat early on Wednesday, said spokeswoman Claude Leotic.

“But we fear there will be an Israeli attack” to prevent the boat from reaching Gaza’s shores, she told AFP Tuesday in a telephone interview.

Israeli media, quoting unnamed officials, have reported in recent days that the navy will intercept the boat and escort it to the Israeli port of Ashdod to prevent it from reaching Gaza.

A different narrative was given to i24News:


Asked if they have any fears about encountering the Israel Defense Forces, Maguire says not at all.

“We are not afraid of the IDF. We understand that they are doing their job and we are a group of unarmed women bringing a message of peace,” she says.

“We expect that they will treat with us dignity and [we] will treat them with dignity as well.”

To their own fans, they say the exact opposite in an “urgent press statement”:


From past Israeli interceptions the possibility of a violent military attack as was experienced by the Mavi Marmara flotilla in 2010 is a reality.

It is deplorable that despite the loss of lives resulting from Israel’s unlawful piracy in international waters, the Israeli regime has once again threatened to repeat its criminal conduct. By the same token, it is inexcusable that the United Nations and its Security Council have failed to warn Israel not to proceed with its threat to attack the WBG.

There were supposed to be two boats, but one of them dropped out.