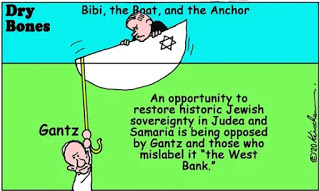 Benjamin Netanyahu and Benny Gantz have reached a critical point in their negotiations to form a Government of National Unity: whether to seize the opportunity presented by President Trump to restore Jewish sovereignty in Judea and Samaria – the heartland of the ancient and biblical Jewish National Home – after an absence of 3000 years.

Netanyahu wants to do so in tandem with President Trump – immediately a Government of at least 61 members headed by him as Prime Minister is formed. Gantz is not prepared to do so unless the Arab States – notably Jordan – and the international community agree – virtually guaranteeing it will never happen.

The Jewish media do not seem to have grasped this unique opportunity given to the Jewish People to turn a 3000-year-old dream into a miraculous reality.

Using what can only be described as the language of the enemies of the Jewish people, the mainstream Jewish media in Israel and elsewhere have been headlining their reports of the ongoing struggle between Netanyahu and Gantz with very similar headlines:

These Jewish media reports are doing the Jewish People a great disservice.

The correct name of the “West Bank” is “Judea and Samaria” – the geographic place name used for 3000 years until 1950 – when its name was changed by Transjordan following its illegal occupation of Judea and Samaria and the ethnic cleansing of all Jews living there in the 1948 War of Independence.

The term “Judea and Samaria” had been recently used in Part II A of the 1947 UN Partition Resolution.

The 1950 change of name to “West Bank” has since been used to mask any Jewish claims or connection to the land. To rub salt into the wound the United Nations now calls it the “Occupied Palestinian Territories”.

The term “annexation” connotes taking something to which you have no claim. Yet the 1922 League of Nations Mandate for Palestine included Judea and Samaria as areas in which the Jewish National Home could be “reconstituted”.  This right to do so is preserved today by article 80 of the United Nations Charter.

“West Bank annexation” is a distinctly anti-Jewish phrase. “Restoring Jewish sovereignty in Judea and Samaria” states the Jewish case. Four more words for media to include in their headlines and reports that create a very different perception and understanding of what is at stake.

As Jews recount the miracle of the Exodus from Egypt at their Seders this week, think of the miracle Jews may be soon blessed to witness with their own eyes – reclaiming patrimony in the ancient Jewish homeland after 3000 years.

Author’s note: The cartoon—commissioned exclusively for this article—is by Yaakov Kirschen aka “Dry Bones”—one of Israel’s foremost political and social commentators—whose cartoons have graced the columns of Israeli and international media publications for decades. His cartoons can be viewed at Drybonesblog