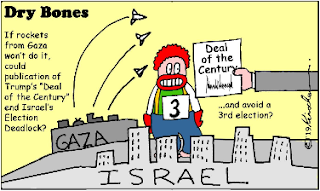 The release of President Trump’s long-awaited and eagerly-anticipated deal of the century could be just the catalyst required to persuade Avigdor Liberman’s Yisrael Beitenu bloc of 8 members to join Israeli Prime Minister Netanyahu’s bloc of 55 members to form Israel’s next Government.

Trump has previously announced that he would not present his plan to resolve the Arab-Jewish conflict until a new Israeli government was formed – but Trump’s position could be dramatically altered as the current political uncertainty in Israel seems to be leading to a third election being called within the space of 12 months.

New Right chairwoman Ayelet Shaked has been trying in the past week – unsuccessfully so far – to create a situation that would bring Liberman’s bloc and Netanyahu’s bloc together to enable a new government to be sworn in.

These meetings focused on a compromise on issues of religion and state – and especially the Draft Lawrequiring ultra-orthodox youth to do military service – which would allow the parties to sit together in government – as was the case throughout much of the term of the last elected Government.

Both sides reportedly were willing to listen but found it too difficult to compromise. Liberman’s side is interested in recording an achievement on the Draft Law – while the ultra-orthodox seek to prevent the law from becoming too sharply-worded.

President Trump must be champing at the bit at the continuing failure of the major political parties in Israel – Likud and Blue and White – to form a Government of National Unity – that would have heralded the release of Trump’s peace proposals in September.

Trump would be equally confused by the fact that the Netanyahu and Liberman blocs have been unable to coalesce into Israel’s next Government  – despite the fact that they garnered 2,238,400 votes against the centrist and left parties who could only manage to get 1,556,491 votes.

There are five compelling reasons for Trump to release his peace proposals within the next month – rather than wait for another Israeli election to be held in March or April 2020:


• Trump could be involved in fighting impeachment proceedings in the Senate next year asthe House Intelligence Committee controlled by the Democrats continues its campaign against him.

• Trump needs as much time as he can possibly get to promote, fully explain and expand on his ideas aimed at convincing Jews and Arabs that it is time to bury the hatchet after 100 years of unending conflict. This could involve countless hours in meetings and negotiations with Arab and Israeli leaders.

• Trump’s plan would focus on the need for Israel to get its act together and form a properly constituted Government to deal with and negotiate on Trump’s proposals.

The priority of trying to reach an historic agreement with their Arab neighbours would surely supersede the domestic political wheeling and dealing that has so far marked Israel’s inability to fashion a Government.

Any attack on Israel by its enemies could be another shock to jolt Israel out of its current electoral complacency. The Israeli Government that would emerge could be either a National Unity Government or a Netanyahu–Liberman Government.

Either would be preferable to the current standoff and political uncertainty.

Author’s note: The cartoon — commissioned exclusively for this article —is by Yaakov Kirschen aka “Dry Bones” —  one of Israel’s foremost political and social commentators — whose cartoons have graced the columns of Israeli and international media publications for decades. His cartoons can be viewed at Drybonesblog