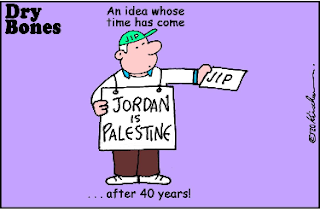 The claim that “The Israeli right has no solution for civil rights for Palestinians after annexation, except for overthrowing Jordan’s Hashemite monarchy” is a canard that must be totally rejected.

This defamation of the Israeli right needs to be debunked before it is allowed to become accepted fact in the run up to Israel’s elections on 2 March.

I feel qualified to call out this baseless allegation as the founder of the “Jordan is Palestine Committee” (JIP) 40 years ago.JIP was formed to inform public opinion that:


• Jordan comprised 76.9% of the territory once called Palestine

• Jordan’s population alone should determine who Jordan’s ruler should be. JIP constantly pointed out the role the Hashemite monarchy had played for 60 years in preserving the major part of Palestine as an exclusively Arab State in which Jews were not permitted to live.

JIP contrasted this with the failed efforts of the Palestine Liberation Organisation (PLO) to secure sovereignty in one square metre of territory attempting to wipe Israel off the map.

JIP’s stated policy was actually challenged by one member who sought its replacement with a new policy calling for the overthrow of the Hashemites by replacing King Hussein with PLO leader Yasser Arafat.  JIP members rejected this argument and the disgruntled member quit the organisation.

However he did more – registering JIP in his name in Israel – then seeking to restrain my organisation using the name in Israel in connection with an international conference.

This necessitated my taking Court proceedings in Israel at considerable expense.  The judge ruled in my favour.

Further sensational claims have also been made that


:•“the annexation the right plans has no chance of success without overthrowing the government in Amman and turning Jordan into Palestine.

•“Destabilising the regime in Jordan can be expected to be a joint project of the settlers, the ayatollahs and the evangelists who support Trump.”Extension of Israel’s sovereignty into Judea and Samaria can occur incrementally – starting in parts of Area C designated in the Oslo Accords which covers 60% of Judea and Samaria.

Area C is under Israel’s full administrative and security control and 50000-70000 Arabs live there.

None of the above proposals requires the overthrow of Jordan’s King Abdullah or Jordan’s participation in negotiations with Israel.

However Jordan needs to negotiate with Israel on Judea and Samaria’s future after 40 years of refusing to take up the JIP solution to resolve a conflict now in its100th year – if it wishes to regain any part of Judea and Samaria that was unified with Transjordan in 1950 and then renamed Jordan  – with its Arab residents enjoying Jordanian citizenship until 1988.

Overthrowing the Hashemite sis not the stated policy of any of Israel’s major political parties although some individuals and groups espoused it at a conference in 2017 – which I strongly opposed.

Jordan is the Arab State in former Palestine -and no amount of double talk can alter this historic, geographic and demographic fact.

Author’s note: The cartoon—commissioned exclusively for this article—is by Yaakov Kirschen aka “Dry Bones”-one of Israel’s foremost political and social commentators—whose cartoons have graced the columns of Israeli  and international media publications for decades. His cartoons can be viewed at Drybonesblog